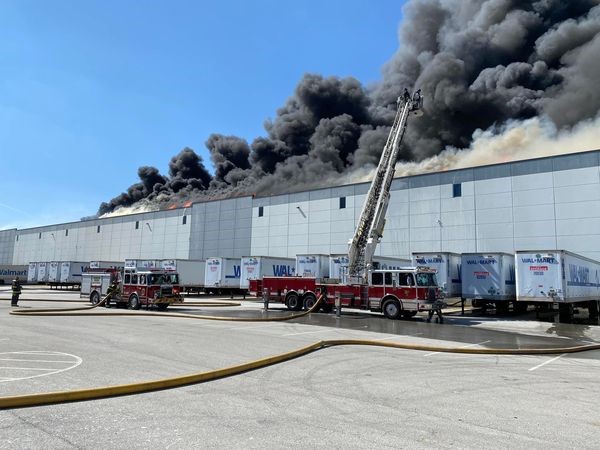 PLAINFIELD, Ind. – Two days after a massive fire broke out at a Walmart distribution center, firefighters are beginning to move from battling the blaze to finding out how it started.

On Friday afternoon, officials from Alcohol, Tobacco, Firearms and Explosives (ATF), U.S. Environmental Protection Agency (EPA), Department of Environmental Protection of Indiana (IDEM) joined Plainfield firefighters and police to provide an update on the ongoing investigation. in the fire. During the press conference, they discussed the status of the case, the investigation into the origin of the fire and the concerns of members of the public.

Here’s what we’ve learned so far about the fire.

Where and when did this happen?

The fire started around 12 p.m. Wednesday at the Walmart fulfillment center located at 9590 Allpoints Parkway. Smoke from the large fire was visible several miles away. Neighboring facilities were evacuated as a precaution and residents were asked to shelter in place.

Smoke from Plainfield fire seen on radar, explained by meteorologists

How did it start?

With the fire now under control, investigators are about to be able to enter the establishment. However, we won’t know the cause of the fire for days or even weeks. A specialized team from the ATF is now involved in this investigation.

The ATF National Response Team responds to major fires, explosions and bombings to identify their cause and origin. This team typically works as part of a multi-agency team to reconstruct the scene, identify the origin of the fire, and determine its cause.

Plainfield Fire Chief Brent Anderson said it appears the fire was first spotted on the third floor of the warehouse, but the investigation will determine more details about its origin and cause.

What was inside the distribution center?

The warehouse contained a variety of items ready for distribution, including clothing, food, electronics, and many shipping materials.

“If you can think of it, it’s probably in there,” Anderson said of the installation and its contents.

However, in Friday’s update, they said they don’t believe there were any hazardous materials inside the building, but an investigation is ongoing.

How big was the firefighting effort?

At the height of the fire, nearly 200 firefighters intervened to put it out.

Firefighters encountered fierce fire and thick smoke with zero visibility. Crews fought the blaze for about 30 minutes inside the warehouse before moving into a defensive operation.

“Each of these departments that responded came with the same goal in mind to help Plainfield and try to get this fire under control,” said Capt. Eric Banister, public information officer for the township fire department. of Wayne.

To be specific, 30 agencies responded to assist the Plainfield Fire Department in its efforts. Crews were working in shifts of 4 to 6 hours each to stay cool while battling the fire.

Has anyone been injured?

According to Anderson and Walmart officials, about 1,000 warehouse workers were inside the building when the fire broke out. All were able to escape and are found.

Services responding to the scene credited the quick actions and preparedness of Walmart employees and management for getting everyone to safety.

“While this could be an event that costs a lot of dollars, a heart, a big loss of dollars and a loss of property, I think the only positive takeaway is, as I said earlier, no injuries. serious, no loss of life,” Anderson said. “That’s what we should be focusing on, that all the systems have worked from the 911 calls to the fire protection systems to the emergency response and to where we are today. today. That the response has been enormous and exceptional.

What happened to the employees?

Plainfield school buses ferried the workers to a reunification site on Smith Road. Many employees forgot their phones during the evacuation and were unable to contact loved ones.

A Walmart spokesperson said all affected workers will be paid for 40 hours this week, plus any overtime, as the facility remains closed. The company said it would help with accommodation and transportation for employees who needed it.

Some employees were able to recover their vehicles, but there are others who cannot be recovered at this time.

What’s going on there now?

The scene remains active, with some road closures still in place. The Plainfield Police Department secured the scene. Road closures remain in place, including the 100 South between Ronald Reagan and Smith Road. The All Points Parkway may also be closed at times when equipment is moved.

And all the debris?

There are lingering concerns about smoke from the fire. The EPA is monitoring air quality and working with state and local health departments to address the health and environmental impacts of the fire.

Officials have urged residents to avoid touching the debris as it could be toxic. They said it was best to err on the side of caution.

For Hendricks County residents concerned about the health effects of smoke, they can call a dedicated hotline at 317-718-6052. People in other counties should contact their local health department.