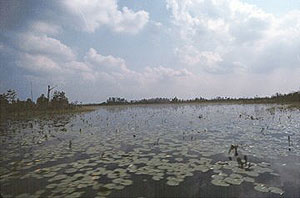 US Army Corps Blocks Titanium Mine Project Near Okefenokee Swamp |

ATLANTA — The Alabama company seeking to open a titanium mine near the Okefenokee Swamp faces an additional hurdle.

The US Army Corps of Engineers rescinded an earlier approval for the project and will now require Twin Pines Minerals to reapply for a federal permit. The company is already seeking permits from the Georgia Division of Environmental Protection.

In a memorandum released late last week, Michael Connor, Assistant Secretary of the Army for Civil Works, wrote that Twin Pines failed to properly consult with the Muscogee Creek Nation despite their request for such consultation.

Opponents of the mine, who argue the project would threaten the hydrology of North America’s largest blackwater marsh, applauded the Corps’ decision.

“Thank you to everyone who supported the Okefenokee Marsh and the Suwannee and St. Marys Rivers during this lengthy permitting process,” said John Quarterman, executive director of Hahira-based environmental advocacy group Suwannee Riverkeeper. .

“Special thanks to the Mayor and Council of Valdosta for their resolution of September 11, 2021, supporting the swamp and opposing the mine. This recent decision was one of the demands of this resolution.

U.S. Senator Jon Ossoff, D-Ga., who visited the swamp last year, lobbied the Corps and the U.S. Environmental Protection Agency to stop the mine.

“Okefenokee is a sacred natural resource,” Ossoff said. “It is a wildlife resource that must be protected.

Twin Pines officials said they plan to continue with the project despite the Corps’ decision.

This story is available through a partnership with Capitol Beat News Service, a project of the Georgia Press Educational Foundation.