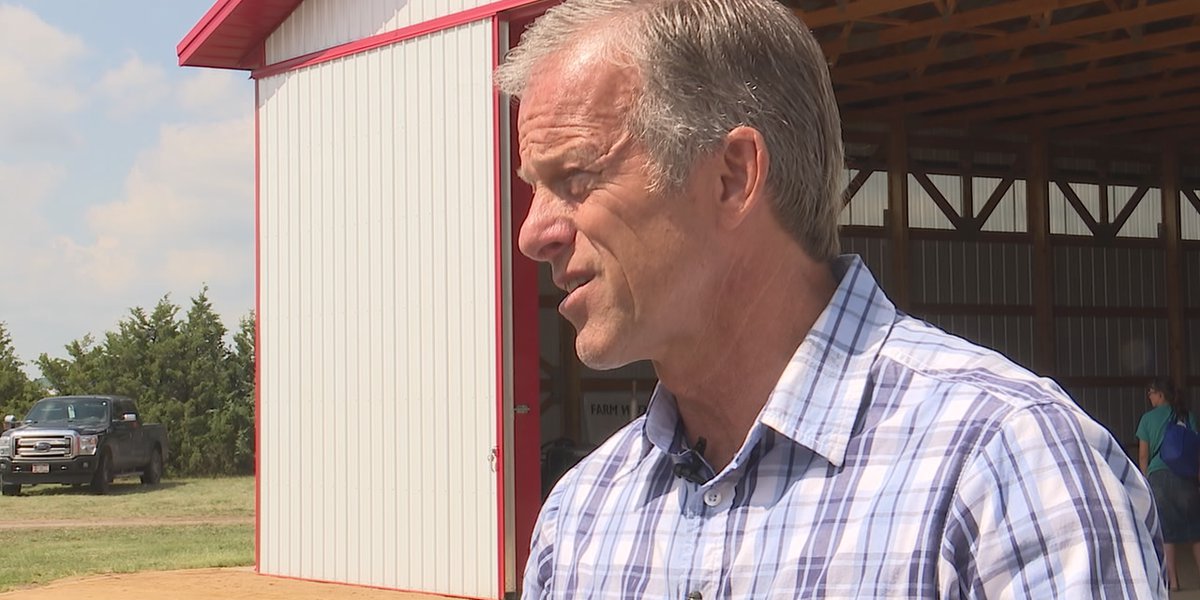 MITCHELL, SD (Dakota News Now) – South Dakota farm leaders and the three members of the U.S. congressional delegation representing them in Washington, DC, are on lockdown in what they believe is the important part of the next Federal Farm Bill.

Senators John Thune and Mike Rounds joined Rep. Dusty Johnson on stage for a 90-minute Farm Bill forum at DakotaFest in Mitchell. Subsequently, they all received “Farmer Friends” plaques from American Farm Bureau Chairman Zippy Duvall for voting with the bureaus position on farm issues at least 70 percent of the time.

The first two of the 12 “titles” in the current 2018 bill are “commodities” – the title that most affects the results of farmers and ranchers – and “conservation”, which, in part, addresses the “environmental concerns”.

Rounds noted that only about 15% of the agricultural bill will go to farmers and ranchers. He described how much more it costs to be a farmer than it did five years ago, with high input prices, diesel costing $5 a gallon, seed prices that have “exploded” and prices for “too high” fertilizer.

“What (farmers) want to do is manage the risk of putting a lot of money into each crop,” Rounds said.

In separate interviews with Dakota News Now, Republican politicians all said they expect to fight with Democrats over how much money will go to agricultural products versus conserving and protecting the environment. ‘environment. Whatever goes to conservation, they fear it will be too much.

Johnson said Republicans “are going to be on the defensive” and that many Democrats are “trying to turn the Farm Bill into an environmental bill.”

“We can’t allow the left to hijack the Farm Bill,” Johnson said. “It’s going to force Democrats and Republicans in farm states to work together to send the message that food security is national security, and the Farm Bill is playing an incredible role in that.”

Johnson, Rounds and Thune all referred to the $27 billion that will go to environmental conservation under the recently passed $468 billion Cut Inflation Act, which Thune said was “very ineptly and inappropriately named”.

“We don’t really know where it’s going except, we’re assuming, with the Democrats putting it in there, it’s going to fit into the climate agenda that they have.”

If Republicans take control of either house, Thune, the current Senate Majority Whip, said his party “will take all available permits, allocations and funds and put them into programs of conservation that makes sense, whether it’s land projects or set aside projects, not some crazy stuff that (Democrats) could spend it on.

“Who knows? They might put it in electric vehicles. I just know it’s their top priority. Their whole energy policy is all about EVs.

Johnson said farmers and ranchers are already “environmental heroes” who “by their own decisions and through voluntary and flexible programs” are holding more carbon in the soil than ever before.

“They’re 287% more productive today than a lifetime ago,” Johnson said. “It has a huge impact on stewardship of the land.”

VanderWal, president of the South Dakota Agricultural Bureau, is a corn and soybean farmer and cattle rancher near the Volga.

“We live off the land,” VanderWal said. “It’s our factory, so we want to take care of our own natural resources, our own soil.

“We want to keep that topsoil where we can use it. We want to protect water because we drink groundwater. Most farms have wells, and so if we all become polluted, our families will suffer. Air quality and things like that are important to us.

Asked to give an example where the federal government is spending too much money on environmental protection in agriculture, VanderWal said too much emphasis has been placed on the CRP, or conservation reserve program, which is administered by the Farm Service Agency (FSA).

In exchange for annual rent, farmers enrolled in the program agree to remove environmentally sensitive land from agricultural production and plant species that will improve environmental health and quality.

VanderWal said CRP rental rates are sometimes too high, to the point that they compete with young farmers and ranchers.

“A few years ago a CRP came out, and a young farmer was trying to lease a herd of cows and trying to build a herd,” VanderWal said. “And he lost to the government, the ability to rent that. So it’s not fair.

Cases like this, VanderWal said, prevent young farmers from getting started and make it difficult for future generations of farmers to “feet in the public eye.”

VanderWal told politicians that the CRP needed to return to its original intent – to protect marginal lands.

“If they’re highly erodible, that sort of thing,” VanderWal said, “then yes, it’s appropriate to put that in there. you that we are supported at the same time.

While commodities and conservation were the Farm Bill’s two main talking points, 80% of its spending is typically on “nutrition.” This part of the Farm Bill was first created by the Food Stamp Act of 1964 and governs programs used by people who cannot afford to buy food in times of hardship.

“If we keep the nutrition program in the farm bill,” Rounds said, “it also means that people in urban areas have a stake in seeing the farm bill pass. There are only 18 members of the US Senate who come from states where cows outnumber people. So you have to have the support of other groups to get a farm bill through the U.S. Senate, and you do that by making sure you have a good nutrition bill, the “SNAP” program (formerly called food stamps) and so on. away, and a good school lunch program, as well as a conservation program so organizations like Ducks Unlimited and Pheasants Forever also support the Farm Bill.

“And we can do it across bipartisan lines.”