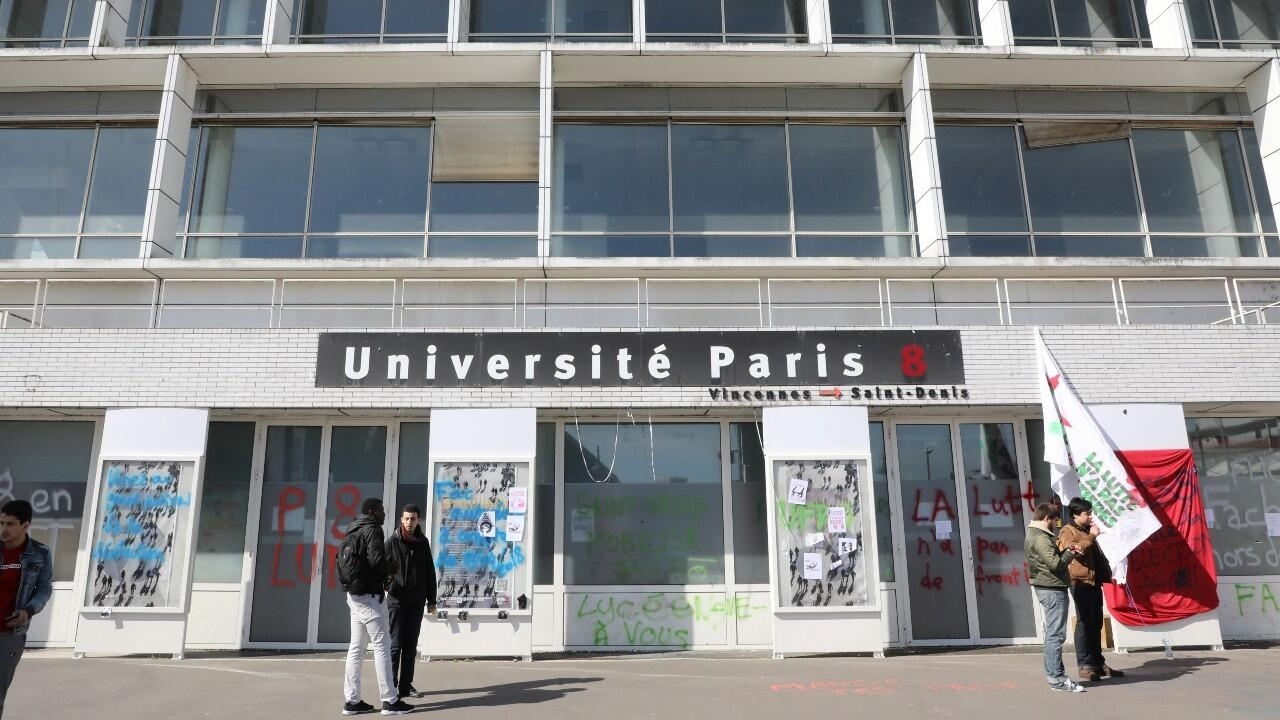 French far-left Jean-Luc Mélenchon failed to qualify for the presidential run-off on Sunday, leaving far-right flag bearer Marine Le Pen to challenge Emmanuel Macron for the top job again. from France. But among 18-25 year olds, it was Mélenchon, 70, who won the evening with 29% of the vote. What his supporters do next will be critical on April 24. FRANCE 24 met students north of Paris who voted for Mélenchon. None were eager to help re-elect Macron, even against the far right.

“Macron or Le Pen, we’re screwed anyway. For my first election, I hoped for better”, thought Esteban, one hand in his pocket, the other leaning against a Vélib terminal of self-service bicycles at the gates of Paris 8- Saint-Denis University, north of the French capital. In Sunday’s first round of voting, the 18-year-old voted for Mélenchon. “It was the vote closest to my convictions. I’m not going to lie to you: it makes me lose hope in a better world, or at least with more social progress”, he lamented after the narrow defeat of its candidate.

The film student is waiting for a teacher who has brought his class despite the current strike movement, unrelated to the Elysée drama competition. The entrance to the university is blocked by a chain of interconnected trash cans. It is 2 p.m. and the picketing students have left their morning shifts. The school had decided to close for the day anyway. The posters and flyers in the garbage cans shed light on the demands of the strikers: “The presidency of the university refuses to enroll students fleeing the war in Ukraine. There are still 23 students without a residence permit that the school refuses to admit!

Esteban’s friend, Bruno (pseudonym), also wants to talk. He jumps to finish his companion’s sentences. An 18-year-old student from Paris, Bruno comes from a politically sensitive family, he explained. “My grandfather was a communist member of the French Resistance and my father was steeped in this culture,” he boasted. “I especially don’t want to see Macron back in power, so for the second round I hesitate between voting white and voting Le Pen. Marine Le Pen is better than Macron on social issues. And Macron, after all, put serving ministers who have carried out far-right policies,” Bruno said, accusing Interior Minister Gérald Darmanin of radical repression.

Esteban agrees. He is angry with the incumbent for going back on his environmental promises. “There was yet another report [by the Intergovernmental Panel on Climate Change] recently saying we had three years to act on climate change,” he explained. None of his friends said they could identify with the run-off candidates’ positions on environmental issues.

“However, I find the protectionism that Marine Le Pen proposes more interesting than Macron’s ultra-liberalism,” Bruno said. Having a leader of the far-right National Rally as president of France does not scare him, he explained. “The zero immigration policy doesn’t work, it doesn’t apply. It’s obvious. Even Macron didn’t manage to go through with the deportations. It will be like Donald Trump – did you know that deported fewer migrants than Barack Obama had?

“I will have to take over Le Pen’s platform”

“I don’t like Macron and the favors he does to his buddies in secret, like his friends at McKinsey,” Esteban said, citing the consultancy firm the French government hired for his services, not without controversy. , adding yet another line to the student’s long list of grievances.

On March 31, the French financial prosecutor’s office opened a preliminary investigation against the American consulting firm McKinsey for possible tax evasion. But no student reserves judgment in the meantime. “He leaves nothing to chance,” Esteban said of Macron. “He is someone who seeks to take advantage of everything.”

While he’s certain he won’t vote for Macron, Esteban begins to express doubts about voting for Le Pen as the conversation progresses. “I will have to take Marine Le Pen’s platform anyway to see which ballot I put in the ballot box,” he said.

Esteban is comfortable talking politics with his mother, who does odd jobs in the south of France. “My mother is an actress. She is over 50, but she is a waitress, a home helper. She serves lunches in school canteens to earn a salary because she had problems with [the unemployment insurance agency] to recognize his status as acting showman, he explains with a worried air. She voted for Mélenchon and she will vote blank in the second round.

“I will still go to the polls”

However, not everyone shares their parent’s policy. Lilou, nineteen, to begin with. Waiting outside the university for her film professor, she too explained that she had chosen Mélenchon in the first round, initially for her environmental proposals. “In my family, the votes were always kept secret. But I think my parents voted for Macron,” she said, before hesitating. “Which candidate proposed to increase the minimum pension?” she asked. The subject is at the forefront in Lilou’s family; everything rests on his father’s pension. “My mom quit working at 25 to raise my sister, my brother and me,” she explained.

For Lilou, a concern is money. “Macron wants students to pay for university, to raise tuition fees. That won’t be possible,” she said. If this proposal does not appear clearly in Macron’s campaign program, it was attributed to him in January after remarks he made at a conference of university presidents, saying “we will not be able to stay permanently in a system where higher education is priceless”. for almost all students. The comment sparked strong reactions from student unions, after which the holder returned to his equivocal remarks. “When you want to fight against the economic insecurity of students, you don’t increase tuition fees,” he said later that month. But to hear Lilou tell it, fears remain.

One thing is certain: Lilou will not vote for Macron. “I will still go to the polls. It’s important. But since I don’t like any of the candidates, I prefer not to participate in this vote. I will vote blank,” she explained.

Clinging to leftist hopes for parliament

More and more students are arriving outside the closed university. One group is due to attend a political science conference on preventing inequality, which will take place outside in a nearby square.

Before joining the rest of the group, a student shared her disappointment with a reporter. She voted for Mélenchon and said she refused to vote for Macron in the April 24 runoff. “It would give him legitimacy, when he can’t stop the rise of the far right. Quite the contrary,” she argued. “I blame him for his increasingly repressive policy, for the police violence he was unable to put an end to, for his contemptuous line against the poorest,” she said.

The 21-year-old prefers not to participate in the second-round vote, she said. But she is anxious for the next election after that: French voters return to the polls on June 12 and 19 to elect their lower house deputies to the National Assembly. “I am clinging to the legislative elections to obtain a majority on the left. I will have no relief until I am sure that we can counter the power of the future president”, she declared, before turning to her friends.

This article has been translated from the original in French.

What is the Gas Guzzler tax?