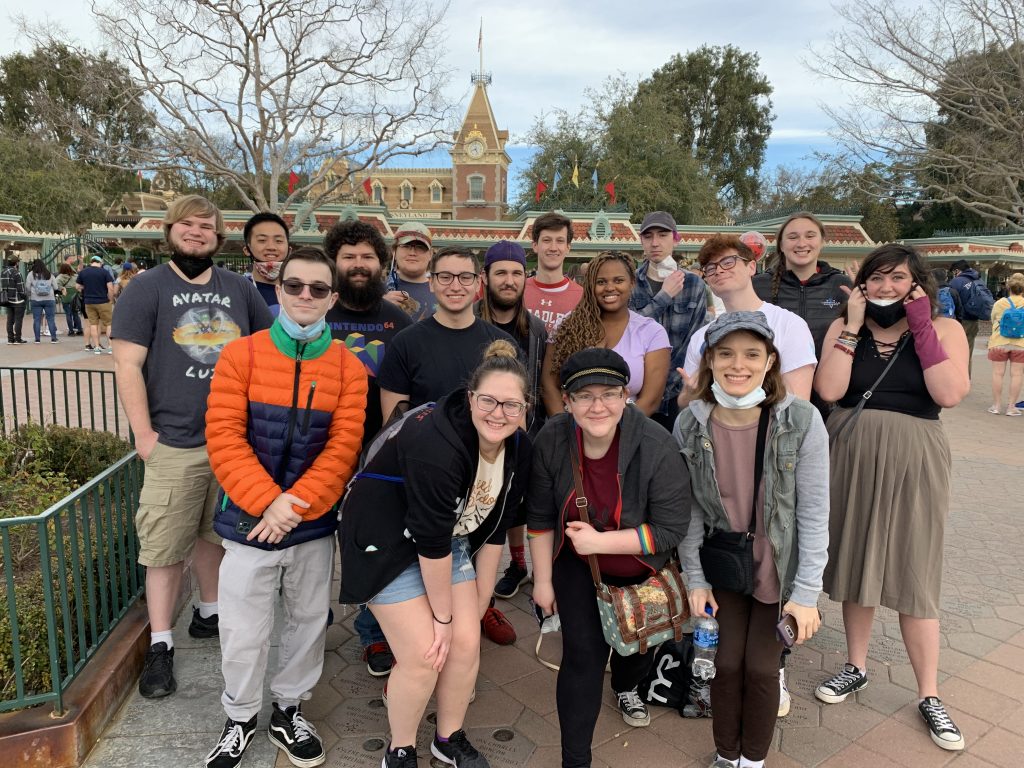 Almost every student dreams of having an assignment that makes them feel like kids again. While others wish for a star, some students have made it a reality with the Interactive Media Department by going to Disneyland.

The class trip to warmer weather on the West Coast was for students enrolled in an environmental storytelling course. In course IM 491, students learned about the impact of using the environment to move their narratives.

Course professor David Abzug said this aspect of creating media such as TV shows and video games could immerse people in the story. After his own trip to Disneyland, Abzug wanted to add more environmental storytelling to Bradley.

“Rise of the Resistance was the ride that made me think of this course because the amount of storytelling that is on this ride is three steps away from someone who has already launched themselves outside of the ridiculous,” Abzug said.

Abzug admitted the ride was enough to bring him to tears on his first visit as a Star Wars fan.

With over 30 students interested in the class, only 17 were selected to enroll. Former Disney Imagineer Scott Rodgers led the class through parts of the park and pointed out hidden details.

“It was like having a manual for a video game while playing a video,” said Tre Muste, senior animation major. “We were set on going to Disneyland, but he was like, ‘Oh, if you look this way’…He was basically there to show us people’s guides or get them ready in the park.”

The students discovered that the simplest things on site – the trash cans, the soda vendors, the bathrooms, the cash registers, the waiting areas for the rides – were transformed to create an immersive experience for fans. adventure parks.

Changes in the various themes of the park were also reported during the trip. The country music of Carsland was to mingle with the thunderous songs of Avengers Campus. The signs would have different messages and symbols on opposite sides depending on where the students were heading.

Even the food on the screens came to life.

Senior Animation Major Benjamin Moody once watched videos that talked about “The Mandalorian” items being served. Meals in the world of a galaxy far, far away were available at the park.

“You can watch this show and understand the world better because you can say, ‘Oh, I ate that’ and know if it’s a good [meal] or not,” Moody said.

In addition to the park experiences, students took courses in articles, films, and music that deepened their understanding of world storytelling. Myah Bastian, a senior animation major, said the course’s teaching was beginning to connect to real-world implementation.

“It gives you a bit of a clearer picture, especially as I’m learning,” Bashtian said. “Everything we talked about started to make sense in my mind when you lived [environmental storytelling] in a physical space.

The J-term opportunity was a perfect chance for students like senior animation major Avery Khral to look at their work with fresh eyes.

“Anyone who wants to do movies, animation, game design, anything related to audience interaction, should take this course,” Khral said. “It was so helpful for me. I go back to my animation and see things I’ve never seen before.

For future classes, Abzug said he would like to keep the classes together, as they were split for days with classes, and integrate Disney’s own immersive storytelling class into the park. He says that IM 491 is open to all majors and he hopes that can continue for J-term and May-term as well.

The students made it clear that the rides, food, laughter and joy would be unforgettable. As they signed up to learn a little more about the magic of Disneyland, it’s evident that they strive to create the same immersive, childlike wonder for others by viewing their own works.