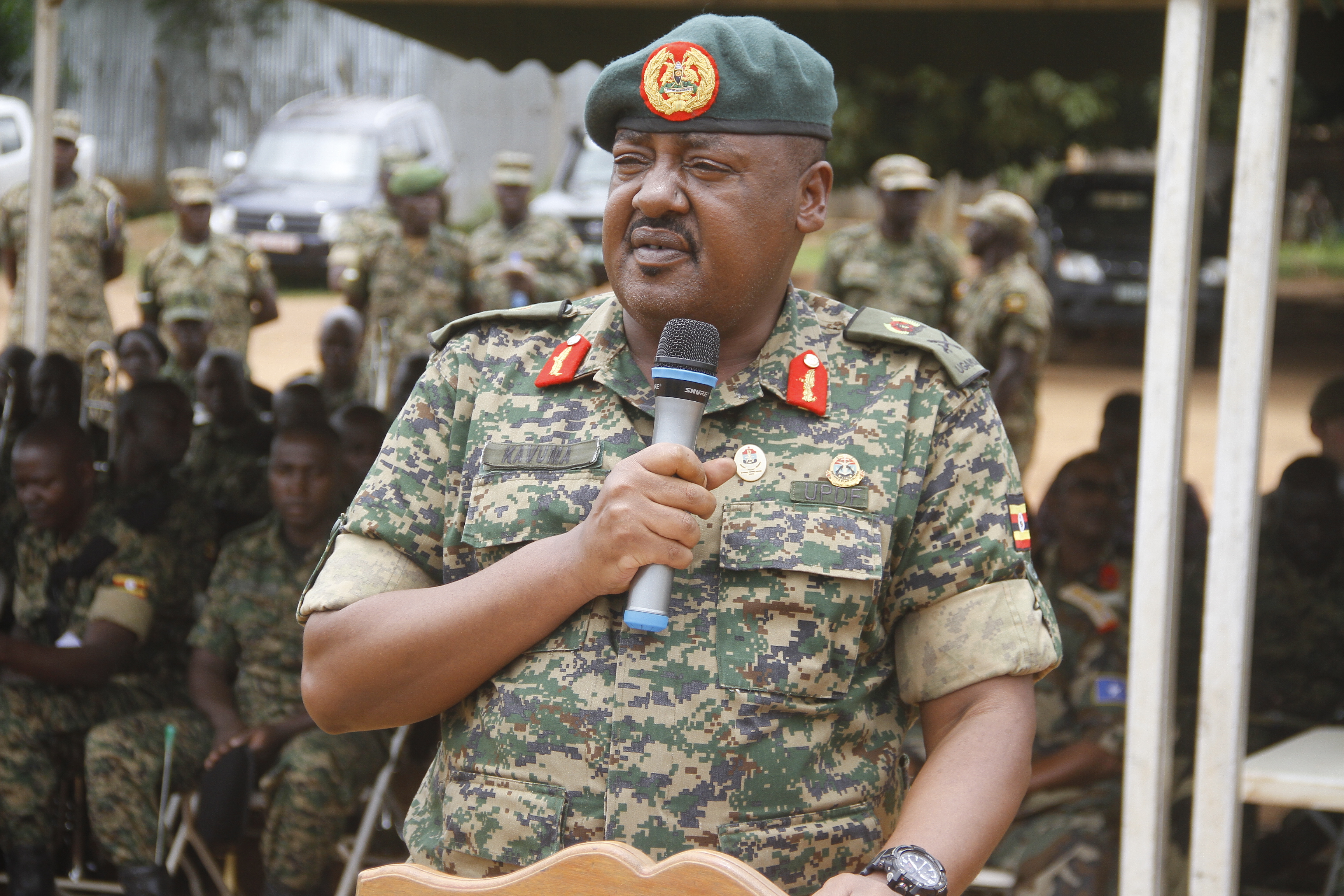 Storm breaks out over money from Sacco army

A proposal by the management of the UPDF savings cooperative, Wazalendo Sacco, to transfer 6.1b Shs accumulated from dead soldiers and deserters to a joint account instead of giving them to beneficiaries has sparked controversy.

Senior sources, whom we cannot name due to the sensitivity of the issue, have said that the junior and senior commanders differ widely on the issue with the Wazalendo board chaired by Major General Sam Kavuma, the deputy commander of the land forces, at the annual meeting of the Sacco. general meeting on March 12.
The meeting was held at the Uganda Military Engineering College in Lugazi, near the Jinja highway.

The divisions came forward at the meeting during deliberations on the proposal to “create a special reserve fund from which all funds abandoned by members for periods greater than five years will be transferred in accordance with Article 55G (1 ) – (6) of the 2020 Law on Cooperative Societies.
The cited law, however, deals with the removal and suspension of members of the board of directors of a cooperative society, and not with financial arrangements or the exchange of the deposit account for unclaimed monies.
Wazalendo Sacco has 80,189 members, with a share capital of Shs 213 billion, Shs 180.5 billion in savings and Shs 388.4 billion loaned to members.

With a total asset value of 499.7 billion shillings and a profit of 42.8 billion shillings last year, officials said the Sacco, which has disbursed a total of 1,400 billion shillings in loans to its members since its founding in September 2005, is the largest in the country.
All soldiers are obligated to pay 10 percent of their monthly salary to Sacco and can additionally purchase shares, each at Shs 15,000, in addition to contributions from civilian personnel of the Ministry of Defense.
The Sacco was formed to bring members together and ‘pool funds (savings) and access loans (credit) at affordable interest rates so that they can engage in productive activities that will help improve their well-being ”, according to the preamble of Wazalendo’s 2019 annual report. .

At the annual general meeting March 11-12, management reported that 6,565 members of Wazalendo Sacco had been inactive for five years and more.
These mainly include soldiers who died in the line of duty or of natural causes or deserted the Force and their contributions and interests accrued until Shs6.1b.
It is this money that the executives of Wazalendo Sacco now want to transfer from the account where it is allocated to known owners and relatives to a special reserve fund account.
The reason for this is the impossibility of tracing the relatives of the deceased soldiers and the high maintenance costs of the account in which the Shs6.1b is kept.

Officials addressed the idea at the March 12 meeting, which a source said surprised and shocked those in attendance.
A major general, whose name we remember, reminded Sacco’s board and management that it was inexplicable for the military not to track down the next of kin when its chief of personnel and administration has records of all soldiers who, upon recruiting, are approved. , among others, by the presidents of Local Council I.

In addition, the UPDF returns the bodies of dead soldiers to their families, which means that the institution has contact details of the closest relatives of fallen comrades.
“… how do you tell us now that you can’t find them (next of kin) when it comes to paying their money?” A senior official allegedly asked Sacco leaders during the Lugazi meeting.
In a telephone interview on Tuesday, the chairman of the board of directors of Wazalendo Sacco, Major General Kavuma, said there should be no alarms because the intention of the proposal to transfer the funds to an account of special reserve is “good”.

“Wazalendo is the guardian of savers’ money. When a member dies, relatives of the deceased member come to claim the money. However, they must be accompanied by official documents, ”he said, deflecting concerns that transferring money between accounts could create a loophole for his abuse.
Our investigations show that some of the official documents that the military requests before giving money from dead soldiers to listed beneficiaries include a death certificate, family / clan records, approved by the area LCI, a letter of administration, identity photos, a copy of the national certificate Identity card and approval of the head of service.

Insiders say these requirements, which are endorsed by the Sacco, create barriers to accessing the money, particularly the approval of a department head that most potential beneficiaries in rural areas either don’t know about or cannot. not access.
“At our last AGM, we proposed that in case the family does not show up, we open a special reserve account where we can keep the money because it is not good to keep such money. in a general account, ”Maj Gen told Kavuma.

Members of Wazalendo Sacco at a meeting. PHOTO / UPDF

In its report to the AGM, the management team indicates that maintaining inactive accounts costs up to Shs 474 million, which is exorbitant.

Major General Kavuma said Sacco’s board of directors asked management to show which of the Shs6.1b money belongs to dead soldiers and deserters so that only money belonging to deserters is transferred to the reserve account while the savings of fallen comrades remain in the member’s account.
“We haven’t made any amendments. All we asked was for the members to make a decision and we have now agreed that management should separate these names so that we can act on them, ”he said.

Controversial
One of the soldiers who attended the meeting had informed this newspaper in confidence that after the proposal had sparked controversy, the general had summarily declared that the item of the agenda had been adopted with “amendments”, without clarify the amendment.
In Tuesday’s interview, Major General Kavuma said: “Even if we transfer the money for those who have deserted, we will keep this money for another five years and if the owners do not show up, we will return to them. members to ask them to make a decision.

One of the soldiers said he chose to speak out on the matter in order to get President Museveni’s attention so that he could intervene in his capacity as commander-in-chief to stop the proposal to transfer the savings of the dead soldiers. in an ambiguous account, something that could provoke the disaffection of the army base.
“I think Mzee (president) should know because it’s too much. As members we are obligated to contribute and now some people want to eat this money while the families of the dead soldiers are still suffering. Not at all, ”said another source.

In 2016, when the president first attended Wazalendo Sacco’s annual general meeting, he instructed the army leadership to keep control of the cooperative and ensure that soldiers’ savings were not lost. not badly managed.
The board of directors headed by Major General Kavuma, who has already served two terms each of two years, is also accused of having exceeded his time after his term expired in 2019.
They remained, however, for a year after arguing that they could not hold an election due to the Covid-19 outbreak.
At the March 12 meeting, the vote of a new board of directors was deferred, once again, on the pandemic in a way one soldier described as “ironic” as hundreds of soldiers lined up. gathered in Bombo earlier this year to vote for army representatives in the 11th Parliament.

Disagreements
Major-General Kavuma, without providing details, said it took a long time for some of the relatives of the dead soldiers to claim the money due to “disagreements between some family members”.
Sources within Sacco say it is common for board and oversight committee members to join management without due process.

One example is Maj Arthur Kwezi, who was the vice chairman of the oversight committee, which oversees the board of directors of Wazalendo Sacco, but landed a position as IT manager at the cooperative before his previous term ended.
“How can someone who is supposed to supervise the management team instead join the team without clearly stated procedures? This should not happen in an institution that is supposed to be well organized, ”said another disgruntled soldier on condition of anonymity for fear of reprisals from commanders.

The supervisory committee in its 2020 annual report also highlighted the salary disparities between staff of the same appointment, earning differently.
“The cases of people with the same appointment, but winning differently and closed professional mobility where staff do not have the opportunity to compete for internal placements remain a source of latent discontent. In addition, the methodology for compensating staff on the basis of streams and levels must be streamlined in a watertight manner, otherwise it is vulnerable to abuse, ”the report said.

The report further added that although, according to the human resources manual, staff are supposed to be assessed no later than June 15 and December, mid-year the assessment was not carried out.
“The oversight committee is of the opinion that in addition to the workforce audit suggested above, the board should be interested in accelerating the completion of the human resources structure. . The existing human resource structure and organization may not be able to meet current demands, ”the report said.

Ye discusses the evolution of the American-Chinese narrative in politics