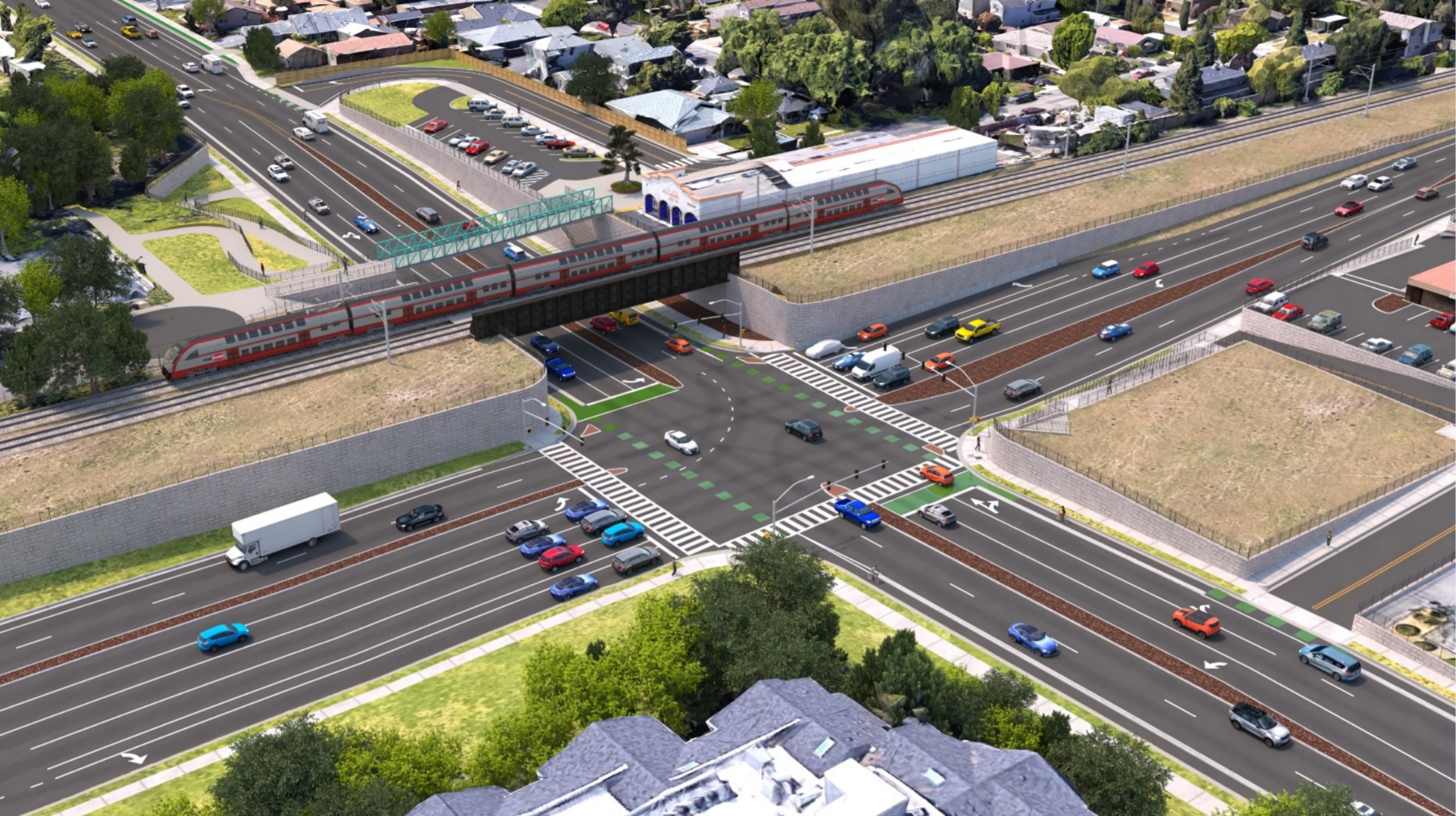 Mountain View’s plans to renovate a complex intersection and separate streets for the Caltrain crossing have run into a problem, with construction now scheduled to begin long after a peak in rail service obstructs traffic.

The Rengstorff Avenue drop-off project proposes to lower the intersection of Rengstorff and the central freeway by 20 feet, separating the carriageway from the Caltrain tracks and preventing traffic on Rengstorff from stopping as trains pass. The hope was that the project would receive early approval and that construction could begin in 2024.

This timeline has since been dropped. Preliminary design for the project and environmental clearance was due to be completed in spring 2021, but that work is not yet complete and likely will not be completed until January 2022. City officials say the delays are on Caltrain, who has cited “a shortage of project management staff,” according to city spokeswoman Lenka Wright. The first construction that can begin is now 2025, she said.

Caltrain officials say the project experienced some staff turnover earlier this year, but the issue has since been resolved. The transport agency denies that the lack of staff caused a delay in the overall project schedule and said the start date for construction has not changed.

Caltrain expects the preliminary design for the project to be completed in December and the agency will still need traffic and geotechnical surveys, according to Dan Lieberman, public affairs specialist for Caltrain. The agency is also awaiting final approval from the Federal Transit Administration and state historic preservation officials, who must approve the project under environmental clearance.

Despite the delays, Mountain View is still ahead of the pack. The towns of Palo Alto and Menlo Park are still reviewing design alternatives, while Mountain View has been tuned to the grade separation design since 2014.

The plan includes two years of construction to lower Rengstorff Avenue and the central highway below the rail tracks, which would include significant changes to the surrounding streets that connect to Rengstorff. Crisanto Avenue would be a traffic dead end in Rengstorff, and the Shell gas station across the street would have to be removed. Despite its proximity to the lanes and the intersection, the La Plaza market will continue to operate in its current location, although the parking lot will be completely redone.

Leland Avenue, rather than being closed to traffic, will meander around the new La Plaza parking lot in order to connect with Rengstorff Avenue.

For years, the proposed grade separation project could not proceed because there was no way to pay for it. Now, the city is expected to receive $ 175 million in sales tax funds from VTA Measure B, which was passed in 2016 but was blocked by a lawsuit until the end of 2018. The city does not. has yet to update cost estimates for the Rengstorff Avenue drop-off project, but previous estimates have revealed it will cost around $ 150 million.

In order to raise money to finance the project, the city is also seeking federal and state grants, and could also tap into local sources such as the city’s business license tax, which generates millions of dollars per year and is owed be used primarily for transportation. improvements.

The separation of levels has been a high priority for towns on the peninsula in recent years and now carries a sense of urgency. With Caltrain electrification on the horizon, trains will be shifting more frequently and causing significant traffic problems at all existing crossings. The current level of rail service is 70 trains per weekday, resulting in the crossing gates being lowered and traffic being blocked for 70 minutes a day, said Joy Houghton, the town’s associate civil engineer, at a Community meeting on November 2.

Once Caltrain’s electrification is complete, that number is expected to rise to 174 trains per weekday, which will result in the crossing of the crossing gates being closed for about three hours a day, Houghton said. The modernization program was supposed to start in 2022, but has since been pushed back to 2024 – later than expected, but still before Rengstorff Avenue was separated from the tracks.

Construction, once started, will include night work, lane changes and road closures at the busy intersection. Although Rengstorff will be closed on both the Central Freeway and Stanford Avenue during construction, traffic along the Central Freeway will never be completely blocked, said Matt Korve, project manager for the company d Aecom engineering. At least one lane will be open in each direction at all times, he said.

At the community meeting, Caltrain officials had previously warned that the city’s initial schedule was quite tight and reflected the fastest route to construction. Pamela Kwan, senior project manager for Caltrain, described it as the best-case scenario, and said environmental clearance takes at least a year.

â€œThere are just a few steps that we need to make sure we do our due diligence to make the design compatible with the build,â€ Kwan said.

Coors Light to provide $ 10,000 grants to Latin American nonprofits on behalf of leaders with impact