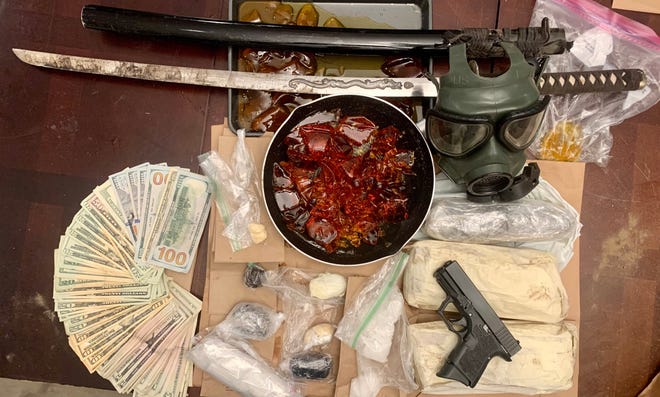 Here is a summary of recent incidents at Ventura County agencies:

OXNARD – Two men were arrested at an Oxnard residence on Tuesday night after a drug investigation found several pounds of fentanyl and methamphetamine, police said.

The arrests took place at 7 p.m. in the 1100 block of South J Street, according to the Oxnard Police Department.

Oxnard police had previously raided the residence in January and seized fentanyl made by a lab inside the location. In September, investigators learned that fentanyl production had resumed at the residence and obtained a second search warrant.

Prior to serving the search warrant, detectives were watching outside the house when they saw a 29-year-old Oxnard man participating in what they believed to be a drug deal, authorities said. He was arrested on suspicion of drug offenses.

After the arrest, detectives served the search warrant on the house. The search revealed several pounds of methamphetamine and processed fentanyl, as well as more than one pound of pure fentanyl, police said. Investigators also seized a gun, processing machine, cutting agents and other evidence of drug processing and sale.

While the warrant was running, a 47-year-old Oxnard man ran out of the house. Police caught the man after a brief foot chase and took him into custody. The man had a large sum of money, police said.

The 47-year-old was arrested on suspicion of drug dealing and other violations. He was held in the Ventura County Jail where his bail was set at $ 500,000.

Dangerous bacteria levels found in water at the beach

The samples were taken as part of weekly bacteriological testing to monitor seawater safety in Ventura County.

Due to the unsafe levels, the agency’s environmental health division posted signs indicating that seawater should be avoided within 50 meters of each sign. Signs will remain displayed until water samples are tested in accordance with safety guidelines.

You can get more details on seawater quality testing by calling the Environmental Health Division helpline at 805-662-6555 or visiting the Monitoring Program website. sea ​​water at www.vcrma.org/ocean-water-quality-monitoring-program.

A debate hangs over the IMF: should it do more than put out fires?

How to deal with valuables and delicate items to save money?

Experts: Israel has ‘no strategy’ to manage Mediterranean…