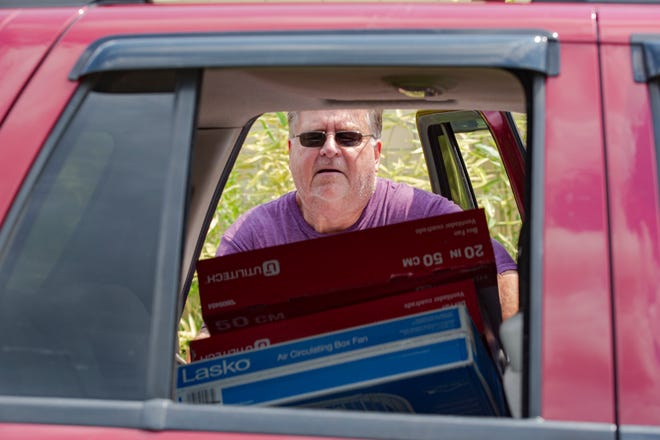 The number of deaths found in the EPA’s analysis correlates with the number of degrees of global warming. And those affected will come disproportionately from vulnerable groups, including people living in poverty, the very young and the elderly, people with pre-existing health conditions and people of color.

Of the 49 cities in the study, five were in Ohio: Columbus, Cincinnati, Cleveland, Youngstown and Canton. But that doesn’t mean cities are islands.

“Using these 49 cities does not mean that individuals in other regions are not affected by mortality from extreme temperatures, but rather that data is not available for other locations to include,” according to The report.

“All Americans are going to be affected by climate change. We now know, based on this set of analyzes, that some are going to be more affected than others,” said Jeremy Martinich, climatologist at the Office of the Air and radiation from the EPA. “And some of these most important impacts fall disproportionately on those who are least able to cope, plan and adapt to these effects.”

Temperatures are rising due to a build-up of greenhouse gases, including carbon dioxide emissions. One of the most prevalent greenhouse gases is carbon. Carbon emissions come mainly from the burning of fossil fuels in vehicles and factories, but can also be exacerbated by expanding development and deforestation.

How warm is Ohio?

If there is a 3 degree Celsius (or 5.4 degree Fahrenheit) increase in temperatures, that means more deaths. In Columbus, there could be as many as 41 additional deaths each year, according to the report.

If the warming reaches 5 degrees Celsius (or 9 degrees Fahrenheit), there could be 89 more deaths from extreme temperatures in Columbus each year.

Why are some groups more vulnerable than others?

People who take drugs for brain, respiratory, and cardiovascular disease are more susceptible to heat-related deaths because these drugs affect their body’s ability to regulate heat.

Older people, defined as those 65 years of age or older, can experience heart strain in response to higher temperatures. Babies and toddlers sweat less, which means their bodies have a harder time cooling off.

Chuck Gehring, CEO of LifeCare Alliance, said the nonprofit has coordinated fan collection and distribution for 20 years. On average, 4,000 fans are distributed each year to those in need.

The needs evolve and increase. It’s not just the elderly who need fans.

â€œWe have met a number of people who are long-term COVID people, or who have just come out of a hospital with COVID, but they still have breathing problems. If they don’t have air conditioning, by a Really hot day, they’re in trouble, â€Gehring says.â€œ The other thing we’ve seen in particular over the past five years or so is that we’ve gotten calls from young fans, because their kids have asthma or breathing problems. “

The problem is compounded when people have multiple risk factors.

For example, there is also a correlation between people who live in urban areas, live in poverty, and are people of color. They are more likely to be in social isolation and to have jobs outside in extreme temperatures.

Studies have shown that blacks and African Americans have higher heat and cold death rates than any other racial or ethnic group. They experience heat stress mortality at a rate 2.5 times higher than non-Hispanic whites, according to the EPA report.

Is Columbus hotter than it was in the past?

â€œOne of the things the study reveals is that it matters how much warming we take in and how quickly we absorb it,â€ said Joseph Goffman, deputy senior assistant administrator, Office of US EPA Air and Radiation. â€œBecause by answering the question: ‘What should communities do? “The answer changes with the time we have to anticipate these changes, build resilient infrastructure and also shift the priorities of where we invest.”

Temperatures in Columbus are warming faster than national and global averages, with the greatest warming occurring in the spring and at night with records for higher low temperatures, according to the Byrd Polar and Climate Research Center at Ohio State University.

Scientists say Ohio’s weather will ultimately be similar to that of the southern states, with summers mimicking those of Arkansas and Louisiana and winters that could resemble those of Virginia and North Carolina .

With the tendency for temperatures to warm, the fear is that cities will not have time to adapt in time.

â€œFor example, the building environment that people live in probably has to change in places like Ohio, to anticipate warmer temperatures,â€ Goffman said. “If the pace of change is rapid, we simply won’t have the time to do it effectively, or perhaps more importantly, the time to do it cost-effectively.”

What is Columbus doing to fight climate change?

The approach to tackling the problem must be two-pronged, which means not only that emissions must be reduced, but communities must take action to adapt.

“We know that without action, increasingly hot days and heavier and more frequent rains in Columbus will have a disproportionately negative impact on our communities of color,” said Erin Beck, deputy director of Sustainable Columbus, the city’s environmental initiative, in a statement.

Mayor Andrew Ginther has pledged the city will be carbon neutral by 2050, in line with the Paris Agreement to limit global temperature rise, she said.

“Our vulnerable populations are already impacted by climate change, which is why we are not waiting to act,” she said.

The city is finalizing its climate action plan, which will provide a roadmap on how to meet emission reduction targets to become carbon neutral as well as on resources, infrastructure and resilience. to adapt to climate change. The plan is expected to be finalized this fall.

Even public buildings, including 20 buildings at schools in the city of Columbus, were without air conditioning at the start of the school year, forcing students to stay at home.

â€œAs we move forward, it’s clear that Columbus and other cities in Ohio need more air conditioning,â€ Gehring said. “There has to be a way to help some of the low income residents, who number in the thousands, pay for their air conditioning.”

It’s unclear how many heat deaths occur in Greater Columbus each year.

While the Franklin County Coroner’s Office tracks deaths from homicides, overdoses and suicides, no data is kept on deaths related to temperature extremes.

Gehring follows the deaths by reviewing media coverage. To his knowledge, there have not been any in Franklin County in recent years due to the extreme heat. But seeing the data from the latest EPA report, he knows this trend is unlikely to last.

“Deaths are going to increase across the country and here. If we go up 5 degrees, you’re going to kill a lot more people,” he said. “There is no doubt. The need will be so much greater.”

Anyone interested in donating to LifeCare Alliance can visit lifecarealliance.org/donate/