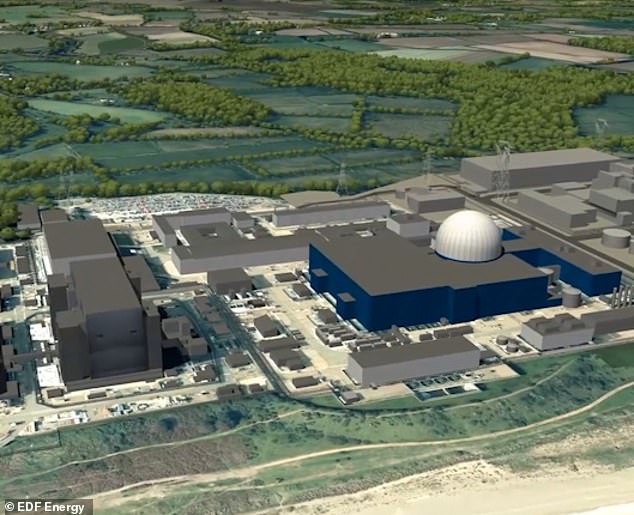 The government is set to rebrand nuclear power as green power to entice reluctant investors to back Sizewell C.

Nuclear power is included in a draft Treasury report outlining which energy sources are classified as environmentally friendly, a source told the Mail on Sunday.

It could pave the way for big investors in the city, including pension funds, to invest in nuclear energy, such as the planned £20billion power station on the Suffolk coast.

The future: Government set to rebrand nuclear power as green power to entice reluctant investors to back Sizewell C

The issue could be one of the first major industry decisions the new prime minister will have to make in his first weeks in office.

A consultation was expected this summer, but was delayed.

Industry sources say Britain risks falling behind other nations. Some countries in the European Union – which has already classified nuclear power as environmentally friendly – ​​are scrambling to launch nuclear projects after the invasion of Ukraine sent gas prices soaring.

Business Secretary Kwasi Kwarteng gave initial approval for Sizewell C in July. A final decision is expected early next year. French energy giant EDF is expected to take a 20% stake, with the government expected to commit a similar amount.

British Gas owner Centrica is reportedly willing to join as an equity investor.

But some potential funders are hesitant to invest in nuclear power due to ESG – environmental, social and governance concerns.

Big asset managers are now competing on their ESG credentials and fearful of pouring money into big, long-term projects like Sizewell C while under pressure to purge their portfolios of dirty energy.

But the war in Ukraine and soaring energy prices challenged the conventional ESG agenda. There is now a debate about whether previously shunned sectors like defense and even some fossil fuel production should be rehabilitated.

However, investors in the city want clarification from the Treasury on nuclear’s official “green” status before committing any money.

Proponents of nuclear power claim that it is one of the most reliable forms of power generation and most importantly, it is low carbon. Kwarteng, tipped to be chancellor if Liz Truss becomes prime minister, backs the sector.

In May the government set up the Great British Nuclear body, which includes a £120m fund to support new programmes. Ministers want to approve eight new reactors by 2030.

A source said: ‘When a project the size of Sizewell C is on the table and investors want to move to 100% green portfolios, they want to know if it’s ‘in’ or ‘out’. ” before investing money. .’

The Suffolk power station could power six million homes and produce electricity for 60 years – although it would take nine to 12 years to build. The Mail on Sunday understands that several pension funds are already considering supporting it. When pressed to invest in Sizewell C last year, Phoenix Group said in correspondence seen by the MoS that it had “no intention” of backing it directly, in part because its ESG rating was unclear.

But the FTSE100 company, which owns Standard Life, now says: ‘If the right conditions are met and the debt has an investment grade in our risk appetite, it’s something we can consider.’

He added that one of the main issues remained the “wider environmental impact” of nuclear energy and its classification.

The Universities Superannuation Scheme, which manages over £80bn in academic pensions, said it was looking for investment in the sector.

A senior industry source was ‘virtually certain’ the government would classify nuclear as ‘green’, adding: ‘Great British Nuclear will be the answer to build at scale, on time and within the budget”. This is the last chance for the UK.

“If we don’t follow up now, we will quickly fall to the back of the queue. It’s frightening.

A Treasury spokesman said it would consult on the classification of nuclear as environmentally friendly “in due course”, adding: “The government’s energy security strategy has made it clear that nuclear energy is and will continue to be a key part of the UK’s low-carbon energy”. mix alongside solar, wind and other energy sources.

Some links in this article may be affiliate links. If you click on it, we may earn a small commission. This helps us fund This Is Money and keep it free to use. We do not write articles to promote products. We do not allow any business relationship to affect our editorial independence.