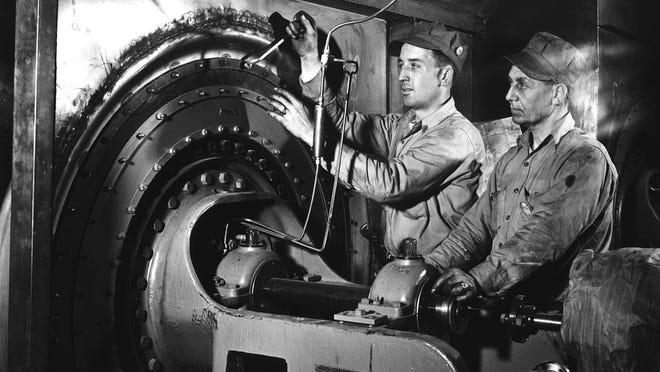 Since 2012, the Department of Energy has proposed constructing a landfill for the remains of demolished buildings from Y-12, the site that contains low-level radiation from Manhattan Project work that took place there.

Federal officials have selected a wooded area on the Oak Ridge Reservation not far from Y-12 at the source of Bear Creek, which empties into the Clinch River. Tennessee environmental regulators have been reviewing the plans and submitting comments for more than a decade.

Local environmental groups, while acknowledging that decades-old waste has to go somewhere, say it is unclear from the 100-page proposal how the new landfill will protect people and the environment from radiation leaks .

“If you’re just moving contamination from buildings into the river, you may be taking it off DOE property, but you’re not actually recovering it,” said Amanda Garcia of the Southern Environmental Law Center. “You distribute it more widely in the community.”

Environmentalists who spoke with Knox News do not oppose the landfills outright, but they do criticize the fact that details of this plan are hard to come by.

The Department of Energy’s Office of Environmental Management is holding a public meeting in Oak Ridge to seek public input on its plans to build a 92-acre radioactive waste landfill in the Bear Creek Valley. The meeting will take place Tuesday from 6-8 p.m. at the Pollard Technology Conference Center, 210 Badger Ave. at Oak Ridge.

“The DOE is opening a 30-day public comment period and holding a public meeting to provide details and answer questions from the community related to the areas covered in the fact sheets,” wrote DOE spokesperson Ben Williams, in an email to Knox News.

The new effort comes on top of a 120-day public comment period that took place in 2018.

Environmental watchdogs, retired Tennessee Department of Environmental Conservation employees and Oak Ridge residents say the landfill fact sheets don’t address issues that have persisted for that the project was first proposed around 2011.

They fear that water will flood the landfill one day, which could then spill out and carry contaminants downstream. East Tennessee is rainy — and getting rainier — and the landfill is in a steep ridge valley at the source of a creek.

“They’re blocking us,” said Axel Ringe, conservation president for the Tennessee chapter of the Sierra Club. “We have consistently asked for more information needed to make informed comments and they just don’t.”

Ringe said the Department of Energy did not provide data on how groundwater moves through the proposed landfill, the type and volume of waste that will be disposed of and whether the landfill could harm Bear Creek, which is easily accessible from a popular hiking trail.

The DOE did not respond to questions from Knox News about community concerns. In public comments, however, the DOE said it strongly disagreed with criticism that an existing landfill was poorly managed. They also disagreed that the location of the new landfill had not been sufficiently investigated.

“There are hundreds of wells in the Bear Creek Valley with decades of data,” the DOE wrote. “The design, as it evolves, will be modified as needed to accommodate new data.”

How we got here

The new landfill is intended to expand disposal capacity for low-level radioactive waste as part of the decades-long cleanup of nuclear facilities inherited from the Manhattan Project and the Cold War. The DOE currently uses another landfill, the Environmental Management Waste Management Facility, to dispose of low-level radioactive waste. This site is 80% full and is located just west of Y-12.

“They’re talking about how for 20 years it’s run smoothly,” Ringe said. “That’s not true. The (landfill) has had a long series of overflow events that have essentially dumped untreated effluent into Bear Creek.”

A team of civil engineers based at the University of Virginia found that the leachate, which is the water that runs through the current landfill, had on average more than twice the allowable concentration of uranium in drinking water. This leachate is treated by the DOE at a nearby facility.

But this treatment process cannot take place if a landfill is flooded, critics say.

Discussions about a new landfill have been ongoing between the Department of Energy, the Environmental Protection Agency, and the Tennessee Department of Environment and Conservation since about 2011. The three agencies found themselves at repeatedly deadlocked over DOE plans, citing a lack of clarity and a lack of data. These disputes have frequently reached officials in Washington, D.C.

“We have to remember that the objective, the standard that the EPA and the TDEC have to determine, is whether the (discharge) protects human health and the environment,” Garcia said. “You leave big gaping holes in the information available to the EPA and TDEC, let alone the public.”

The latest drafts of the proposed landfill plans continue to plague the EPA and TDEC with questions of clarity and regulation. Specifically, whether DOE plans comply with the Clean Water Act and the state of Tennessee’s anti-degradation rules.

Garcia said the updated fact sheets made available to the public did not address those lingering concerns. She said that if this discharge is to be protective, the ministry must establish in advance the type and volume of waste and the cleanliness limits of the water.

“Delaying a meaningful assessment of whether the liner is going to be protective and prevent pollution from moving into groundwater is a big deal,” Garcia said. “It’s not something you can fix after the fact.”

Where do the problems come from?

This was a problem with the previous dump. A DOE audit found that the current capacity of the landfill had been filled with non-hazardous waste that did not need to be disposed of there. A Tennessee audit determined that the contractor responsible for the current landfill was unaware of state requests to limit mercury waste and was unable to provide information on waste that had been eliminated during the audit.

“The DOE probably wouldn’t be looking for a new landfill so soon if the existing landfill space had been used responsibly,” Oak Ridge Councilwoman Ellen Smith wrote in a public comment to the DOE in 2018. fact that the DOE won “I’m not telling us yet what the waste acceptance criteria would be for this landfill, that’s a consideration that limits potential public confidence in the DOE’s decision.”

Dale Rector, a former TDEC employee who worked on the Oak Ridge reservation for 24 years, said the new site never received detailed waste acceptance criteria. This was essential to design the landfill to prevent groundwater infiltration and to assess environmental and public health risks.

“If water gets in there, it has to come out,” Rector said. “Otherwise the waste becomes saturated like a tea strainer.”

Rector previously signed an open letter with other former TDEC employees listing concerns about the lack of clarity in the details of the landfill project. In an email to Knox News, he said those issues weren’t resolved by the new fact sheets released by the DOE.

He said the whole process was weird.

“A decision record is usually a short document that says, ‘We all bought into this,'” Rector said of the agencies involved in designing and regulating projects. “No one has agreed to anything and they are giving us a record of decision.”

Knox News asked TDEC, EPA and DOE if a consensus had been reached. DOE spokesman Ben Williams said the agency had “worked collaboratively and reached consensus” on the issues addressed in the fact sheets.

“While a high-level consensus was reached on the issues addressed in the fact sheets,” wrote TDEC spokesperson Kim Schofinski, “review of the fully revised (second draft) version of the debriefing must take place before formal approval of the TDEC can be made.”

In other words, the devil is always in the details and those details have not been made public.

In public comments, the DOE insisted that it would “meet all regulatory requirements for dealing with mercury” and that waste acceptance criteria would “result from existing state and federal environmental regulations.”

Dale said she was doing this so her children and grandchildren could feel comfortable living in Oak Ridge. She said she wanted transparency so the community could make an informed decision about the landfill. She hoped the DOE would open up after hearing from the public at the meeting.

“I don’t feel like an activist,” Dale said. “I am a grandmother. … I want Oak Ridge to be touted as a name for doing it right.