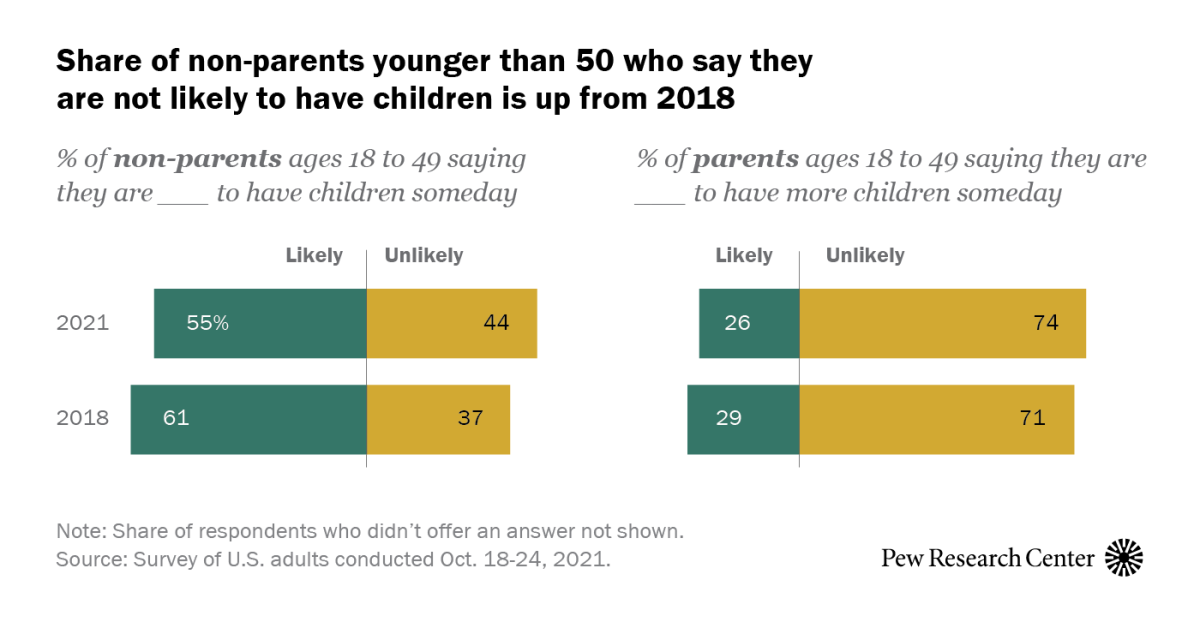 Birth rate in the United States abandoned during COVID-19 pandemic amid the dual health and economic crisis, providing evidence for early epidemic predictions that economic uncertainty could trigger a baby explosion. This continued the downward trend in fertility rates in the United States, which were already at an all time high before the start of the pandemic.

A new Pew Research Center survey finds that a growing share of American adults who are not already parents say they are unlikely to ever have children, and their reasons range from simply refusing to have children. children to concerns about climate change and the environment.

The Pew Research Center conducted this study to find out more about Americans who don’t expect to have children in the future and their reasons.

This analysis is based on 3,866 American adults aged 18 to 49, collected as part of a larger survey conducted October 18-24, 2021. All participants are members of the Center’s American Trends Panel (ATP), a survey online panel which is recruited by national random sampling of residential addresses. This way almost all American adults have a chance to be selected. The survey is weighted to be representative of the adult United States population by gender, race, ethnicity, partisan affiliation, education, and other categories. Learn more about the ATP methodology.

Here are the questions used for this article, along with the answers and its methodology.

Some 44% of non-parents aged 18 to 49 say they are not too likely or not at all likely to have children one day, an increase of 7 percentage points from the 37% who did. said the same in a 2018 poll. Meanwhile, 74% of adults under 50 who are already parents say they are unlikely to have more children, virtually unchanged since 2018.

A majority (56%) of non-parents under 50 who say they are unlikely to ever have children say they just don’t want to have them. Adults without children under 40 are more likely to say this than those aged 40 to 49 (60% vs. 46%, respectively). There are no differences by gender.

Among adults without children who say they have another reason to believe that they will not have children in the future, no reason stands out. About two in ten (19%) say it’s for medical reasons, 17% say it’s for financial reasons, and 15% say it’s because they don’t have a partner. About one in ten people say their age or the age of their partner (10%) or the state of the world (9%) is a reason why they are not considering having children. Another 5% cite environmental reasons, including climate change, and 2% say their partner does not want children.

Among those under 50 who say there was another reason they probably won’t have more children, age (their or their partner’s) and medical reasons were among the top reasons why (29% and 23% of this group said so, respectively), followed by financial reasons (14%) and the fact that they already have children (11%). The smallest stocks cite the state of the world (4%), not having a partner (2%) or having a partner who does not want children (2%).

About a quarter of parents under 40 who do not expect to have more children in the future cite financial reasons (26%), compared to 8% of those 40 to 49. The younger group is also more likely to report not having a partner (6% vs. 1%), while older parents are more likely to say age is a reason they don’t expect to have more children (41% of 40 to 49 year olds versus 5% of under 40 year olds).

Note: Here are the questions used for this article, along with the answers and its methodology.

Anna brown is a research associate specializing in research on social and demographic trends at the Pew Research Center.

TORM capital increase due to the exercise of Restricted

My list of the top 23 office markets in the United States, by vacancy rate ranging…