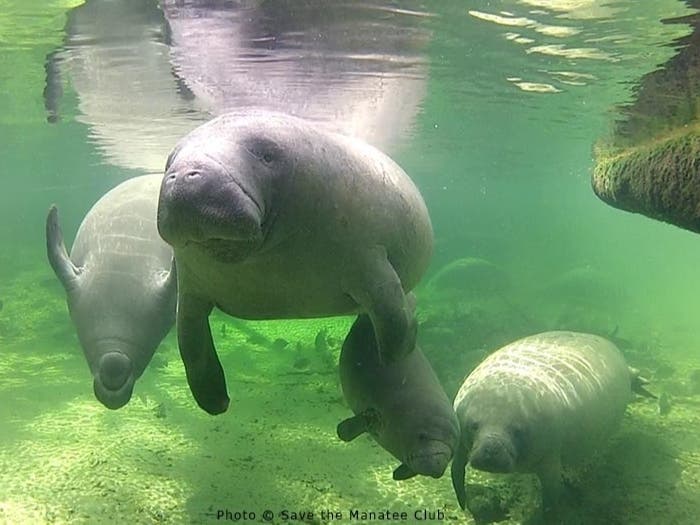 FLORIDA — In a legal agreement with the Center for Biological Diversity, Defenders of Wildlife, and Save the Manatee Club, the U.S. Fish and Wildlife Service has pledged to review critical habitat for the Florida manatee by September 2024.

The action came after the three conservation groups filed a lawsuit in May in federal court in Orlando to force the US Environmental Protection Agency to protect manatees and sea turtles from sea pollution. water in Florida.

The groups were seeking to compel the U.S. Environmental Protection Agency to resume talks with the U.S. Fish and Wildlife Service and the National Marine Fisheries Service about water quality in Florida’s Indian River Lagoon, which has been the site of many manatee deaths in 2021 and this year.

Manatee critical habitat has not been updated since it was first identified in 1976.

“Saving the places where manatees live will help put these incredibly endangered animals back on the path to recovery,” said Ragan Whitlock, a Florida-based attorney at the Center for Biological Diversity. “Protecting the habitat of these magnificent creatures is long overdue, but we are pleased that these safeguards will soon be in place.”

A record 1,100 Florida manatees died in 2021, and more than half of the deaths were due to starvation caused by water pollution in the Indian River lagoon that killed seagrass beds, the main source of manatee food. This represents a loss of more than 10% of Florida’s manatee population.

This trend has continued into 2022, as harmful algal blooms and the loss of seagrass beds and warm water refuges continue to reduce sea cow habitat. Since January 1, 588 manatees have died in Florida waters.

Ragan said unchecked pollution in the Indian River lagoon — home to more species of plants and animals than any other estuary in North America — is fueling the toxic blooms.

“Hundreds of manatees are dying in the Indian River Lagoon as water quality plummets, and the EPA must address the massive nutrient pollution behind this disaster,” Whitlock said.

“This agreement is a vital first step in ending the mass manatee deaths that have become all too common along Florida’s coasts,” said Jane Davenport, senior attorney at Defenders of Wildlife. “Once the species’ current critical habitat is identified, we hope federal, state, and private conservation partners can take decisive action to put the manatee back on the path to recovery.”

“The (US Fish and Wildlife Service) delayed the Critical Habitat Review for a decade, and now the manatee’s plight is so dire that the Critical Habitat Review can no longer be put on the back burner,” said Patrick Rose, aquatic biologist and executive. director of the Save the Manatee Club. “We are thrilled that FWS is finally willing to take this critical step to save our endangered manatees and hope this signals a shift in prioritization of manatee survival and recovery.”

The three conservation groups asked the U.S. Fish and Wildlife Service in 2008 to revise the Florida manatee’s critical habitat. In January 2010, the wildlife service agreed that revisions to critical habitat were warranted, but failed to act for over 12 years.

Animals with federally protected critical habitat are more than twice as likely to be headed for recovery as species without, because federal agencies that fund or authorize projects in the habitat essential are required to consult with the service to ensure that this habitat is not damaged or destroyed by their actions, Rose said.

In addition to losing their main food source in the lagoon due to nutrient pollution, the manatees died in 2021 when Florida’s Gulf Coast was plagued by a red tide that Rose says has fueled by the Piney Point phosphate plant disaster in Manatee County, in which millions of gallons of toxic sewage spilled into Tampa Bay and the Gulf, killing more than 30 manatees.

The groups argue that the standards are not “enough followed or enforced”, allowing discharges from sewage treatment plants and runoff from septic tanks and leaking fertilizers to pollute the bay, leading to the deaths of manatees, turtles of sea and other marine species.

Under the federal Clean Water Act of 2009, the Florida Department of Environmental Protection has set limits for runoff containing nitrogen and phosphorus. However, new studies show that daily data on discharge limits have not taken into account the impacts of climate change.

The three conservation groups filed a separate lawsuit in February in federal district court in Washington, D.C., claiming the Fish and Wildlife Service violated the Endangered Species Act of 1973 by failing to restart required talks. on water quality and failing to act on a 2008 petition to revise the “designation of critical habitat to ensure the survival and effect the recovery of species at risk such as the Florida manatee”.

In 2017, the Fish and Wildlife Service changed the manatee’s designation from endangered to threatened under the Endangered Species Act.

“Endangered” means that a species is in danger of extinction in all or a significant part of its range.

“Threatened” means that a species is likely to become endangered in the foreseeable future.

“The carnage of 2021 should dispel any doubt that Florida waters are in crisis,” said Jaclyn Lopez of the Center for Biological Diversity. “With these gentle creatures dying in record numbers, the Biden administration must act quickly to protect manatee habitat from further destruction.”

“In less than a year, after decades of conservation progress, we have lost more than 10% of Florida’s manatee population,” said Elizabeth Fleming of Defenders of Wildlife. “Without immediate action, the unprecedented manatee deaths of 2021 could become an annual event. The U.S. Fish and Wildlife Service must end these preventable deaths before the species’ recovery is further delayed.”

“The service’s failure to protect critical manatee habitat along with its biologically unwarranted downgrade from threatened to threatened under the ESA has left the endangered manatees to suffer the deadly consequences of an agonizing, yet preventable, mass starvation.” , said Rose. “More troubling is the fact that the FWS recognized over a decade ago that updating critical habitat is essential to the conservation of the species. Nothing can justify further delays.”

Praise for Governor’s Funding for Manatees

In the meantime, all three conservation groups have praised Florida’s Republican governor for his historic state funding of manatee rescue and habitat restoration.

“I am extremely grateful for Governor DeSantis’ commitment of more than $30 million in the fiscal year 2022-23 budget to enhance and expand manatee rescue and rehabilitation efforts and provide habitat restoration. in areas where manatees are highly concentrated,” Rose said. “Due to the unprecedented severity of the ongoing “unusual mortality event” in which more than 1,600 manatees have died statewide in the past 16 months, these and other extraordinary measures are necessary. to protect manatees and their critical habitat.”

On Thursday, DeSantis also pledged a record $20 million of the state’s recently approved $109.9 billion “Freedom First” budget to upgrade and expand the state’s manatee acute care facilities. and to restore access to springs and habitat restoration in areas of manatee concentration.

However, Rose said it would take state and federal cooperation to improve Florida’s water quality enough to prevent the deaths of manatees, sea turtles and other sea creatures. It’s something Governor Ron DeSantis has been loath to do under the Biden administration.

“As Florida’s decades-long battle with degrading water quality and a series of harmful algal blooms has received a boost in the arm from this legislative session, we must insist that the “State of Florida and the Environmental Protection Agency are joining forces to ensure that improved water quality standards are set and met if we are to restore these aquatic ecosystems for the long term,” said Pink.

The Florida office of the nonprofit National Center for Biological Diversity is located in St. Petersburg. The Save the Manatee Club is based in Maitland. And Defenders of Wildlife’s southeast division is based in Asheville, North Carolina.

Get more local news straight to your inbox. Sign up for free newsletters and patch alerts.