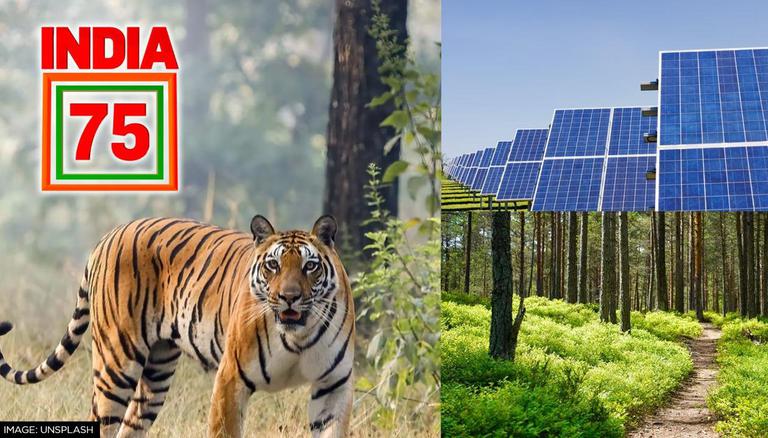 As India prepares to celebrate the 75th Independence Day on August 15, the country has not only done a lot over the past 75 years towards saving the environment, but has also led the world by building the International Solar Alliance to mobilize efforts against climate change through the deployment of solar energy.

Since time immemorial, the concept of environmental preservation has been rooted in Indian culture. Independent India has followed its centuries-old culture of environmental preservation by enacting several laws and regulations to deal with environmental issues such as air pollution, water pollution, global warming and climate change . The enactment of the Wildlife Protection Act in 1972 for the protection of plant and animal species in the country was the first major step that independent India took on the path to safeguarding the environment.

India saves its forests and animals

In terms of forest and animal protection, India’s national parks have grown from 5 in 1970 to 106 in 2022. Moreover, the tiger population which was on the brink, is recovering, with an annual growth of 6%, India being home to 75% of the world’s tigers.

Notably, the tiger population increased to 2,967 in 2018-2019 from 1,411 in 2006, with tiger reserves increasing from nine in 1973 to 52 in 2022. Speaking of wetland conservation, India ranks first rank in Asia in terms of number of protected wetlands. under the Ramsar Convention with China with a total of 75 wetlands registered as Ramsar sites in May 2022.

India to become home of cheetahs after nearly 7 decades

Notably, the last spotted cheetah in the country died in Chhattisgarh, undivided Madhya Pradesh in 1947, following which the animal was declared extinct in the country in 1952. However, the Indian government, as part of the reintroduction plan , will bring cheetahs from Nambia to Madhya Pradesh and it is likely that they will be brought before Independence Day, August 15. The aim of reintroducing cheetahs after almost 7 decades in India, is to restore the cheetah population in the country.

To handle environmental disputes and provide prompt redress, the National Green Tribunal (NGT) was constituted in India in 2010. Notably, NGT is a specialized judicial body with expertise solely for the purpose of adjudicating environmental cases in the country. This decision is also one of the major steps taken after independence to straighten out environmental affairs, as it made some decisions for environmental protection famous, including the prohibition of open burning of waste on lands.

Plastic is one of the major sources of environmental pollution in India, with Indians generating around 3.5 million tons of plastic waste annually. However, the Indian government banned single-use plastic on July 1, which will not only greatly reduce plastic waste, but also affect the environment in a positive way.

India on the path to clean energy

Notably, India will also be home to the world’s largest floating solar power plant, which will help generate 600 megawatts of electricity by 2022-23 in Madhya Pradesh. Apart from solar power, India is also using hydropower to promote the use of green energy. From 4.2 GW in 2016, the installed capacity of small hydroelectric plants increased to 4.8 GW, which is close to the 5 GW target set by the Ministry of New and Renewable Energy.

Since the first electric vehicle in 1996, India is now home to more than 1.5 million electric rickshaws. In 2021, sales of electric two-wheelers increased by 132% compared to 2020, indicating the faster adoption of environmental protection methods. Moreover, by next year, India will add 20% ethanol to gasoline, which will reduce carbon emissions as well as air pollution.

This will notably contribute to a reduction in greenhouse gases equivalent to around 3 lakh tonnes of carbon dioxide emissions per year, which is equivalent to removing around 63,000 cars from the roads per year.

All renewable projects, from solar and hydropower to the use of electric vehicles and ethanol blending, aim to reduce carbon emissions from developing India, which requires energy but will not compromise not the environment. India has leapfrogged many developed countries in terms of renewable energy usage as it ranks 4th in the list of countries that have installed renewable energy capacity in the world. Notably, from 13,242 MW in 2008, India’s renewable energy grew to 1,59,949 MW in 2022, bringing the total share of renewable energy sources in India’s power sector to 39.7%.

From less than 1% sanitation coverage to over 99%

Apart from this, several Indian government programs including Swachh Bharat, Namami Gange, etc. have also helped the environment to be kept clean. Notably, according to reports, in 1947, sanitation coverage in India was less than 1%, however, in 2019 it exceeded 99%, showing the path of India’s road to a clean environment.