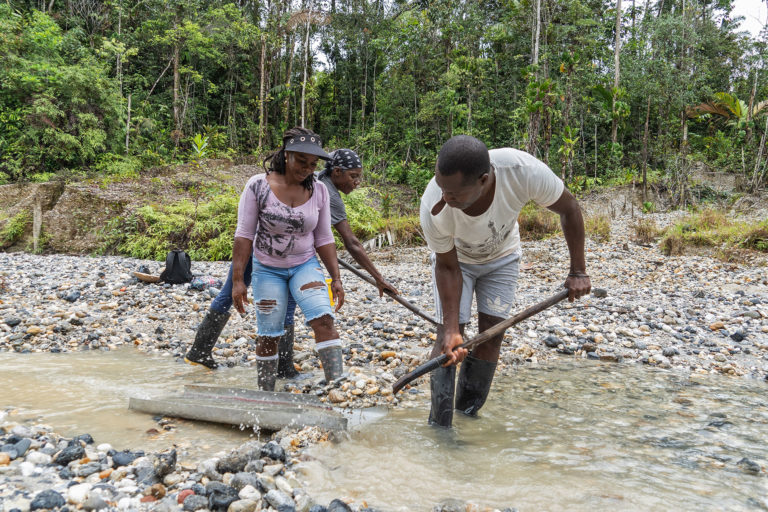 In Colombia, legal mining is a win-win for the environment, traditional communities

BOGOTÃ – In the Colombian department of ChocÃ³, renowned by environmentalists for its abundant biodiversity, Afro-Colombian communities collect gold from rivers as part of an ancestral way of life.

â€œWhen we talk about productive family units here, mining is just one of those activities,â€ said Heyler Serbando Moreno Palacios, a traditional miner based in ChocÃ³ and the legal representative of the local Alto San council. Juan, an Afro-Colombian community.

Mining here is not focused on extraction, Palacios said, as community members do not devote all of their time to the activity; they also fish, hunt and cultivate subsistence crops, or pancoger, such as corn, yucca and plantain.

A mark of the low environmental impact of this type of mining and its cultural significance for Afro-Colombian and indigenous communities, the Colombian Constitution of 1991 establishes a legislative basis for special provisions for non-mechanical artisanal mining in the territories. ruled by these ethnic groups. communities.

Yet the United Nations Office on Drugs and Crime (UNODC) reports that in 2020, 41% of Colombia’s alluvial gold mining – mining from streams or riverbeds – took place in Afro-Colombian territories using heavy machinery. This creates enormous environmental damage, including deforestation, and especially when combined with the use of mercury, which has been banned in the country since 2018.

In Colombia, the illegal gold trade is more profitable than the more notorious cocaine industry; the country’s ombudsperson’s office reports that illegal armed groups use illegal mining to finance their activities, often committing human rights violations in the process.

But mining that does not qualify to be legal, often because mining has not been formalized, is not necessarily criminal mining, which is used to finance criminal activity.

Formalization in Colombia means that a minor meets all legal, technical, environmental, economic, social and labor requirements to be recognized as legal. Yet for small-scale miners, the formalization process is extremely cumbersome and costly, leading most to exploit illegally.

The Colombian government’s environmental and technical requirements to operate legally are undifferentiated as to the type, size and location of the mine, which means that to operate legally, a small miner like Palacios must meet the same standards as a large multinational mining company.

Palacios and 57 mining families in its community have been trying to formalize since 2015, but they still do not have their mining titles because they have not received environmental approval from the National Environmental Licensing Agency (ANLA).

â€œIt’s been a long journey for us,â€ said Palacios. “It has been exhausting and has left many miners demotivated, but we keep trying.”

The situation facing Palacios and its community is part of a larger trend in ChocÃ³, where there are around 50,000 small-scale gold miners. A 2020 report from Germanwatch, a German environmental and sustainable development NGO, noted that almost none of ChocÃ³’s small-scale miners have mining titles. This has led the government to cede mineral rights in indigenous and Afro-Colombian territories to multinationals like AngloGold Ashanti.

Not being formalized also means that miners like Palacios cannot open bank accounts and must sell to middlemen at prices up to 40% lower than the international price of gold, according to Conalminercol, the national confederation. Colombian informal miners. And since these are black market sales, the money can then be used to finance criminal activity and launder illegally obtained funds.

â€œThe frustration is that you have to comply with all the requirements, but then you are not selling the gold for a fair price,â€ Palacios said.

To address some of the challenges faced by small miners, Swiss and American groups are implementing projects in Colombia that aim to use formalization to improve the incomes of small miners while protecting the environment.

The Swiss â€œBetter Gold Initiativeâ€ aims to encourage the formalization of small-scale gold miners by paying them a bonus for â€œresponsibleâ€ gold production that meets 14 social and environmental criteria, including the fact of not using mercury. The initiative also connects participating miners with players in the international gold trade, from banks and refineries to luxury watch and jewelry makers like Chopard and Cartier.

Thomas Hentschel, global director of the Better Gold Initiative, told Mongabay that the initiative aims to cut out middlemen and ensure participating miners in Colombia, Bolivia and Peru receive a premium of $ 1 per gram in more than the international market price they receive. This bonus is then reinvested in technical assistance for minors, as well as in social and environmental projects in host communities.

In ChocÃ³, the Better Gold Initiative works with some 1,400 miners who produce more than 600 kilograms (21,200 ounces) of responsible gold per year, worth more than $ 30 million, Hentschel said. He added that the initiative aims to expand to work with 3,000 gold miners in ChocÃ³ and export about 1 metric ton (35,300 ounces) of responsible gold per year.

The U.S. government’s Oro Legal (Legal Gold) program ran from September 2015 to March 2021 and reported the legalization and formalization of 146 small-scale mining projects that generated over $ 194 million in legal sales of gold. This then led to the Colombian government receiving nearly $ 14.4 million in royalties, taxes and social security payments.

In addition, the program reports that through its interventions, it prevented the use of 70 tonnes of mercury and rehabilitated approximately 17,000 hectares (42,000 acres) of degraded mining land, equivalent to about 18% of all land deforested by illicit gold mining in Colombia since 2016.

Oro Legal also created CORCRESER, or the Regional Service Centers Corporation, to build and manage service centers that help minors not only in the process of formalization, but also with training in areas such as business and environmental standards. In addition, it provides laboratory equipment and facilities to analyze and process gold.

Beatriz Duque, Executive Director of CORCRESER, worked for 12 years at the Ministry of Mines and Energy, most recently as Director of Mines, responsible for Colombia’s mining policies. She told Mongabay that the services CORCRESER provides help ensure that the gold produced by small miners can be traced back to its source, ensuring that it was produced legally and in an environmentally friendly manner. .

She said miners can then be connected to formal markets, thereby bypassing middlemen and ensuring they receive a fair price for their gold. CORCRESER now operates independently, with the first service center opened in 2021 in the municipality of TadÃ³, ChocÃ³, where Palacios is based.

The Universidad de los Andes de Colombia published research in 2020 that reviewed academic literature on artisanal and small-scale mining, and strategies for formalizing and differentiating illegal mining. The research pointed out that a central problem is to provide better incentives for formalization and that the government needs to design a less bureaucratic formalization process.

The report also reflects on the need for systematic and empirical evaluations of formalization programs that have been implemented in countries of the South. It also recommends a research agenda that differentiates illegal mining from informal mining and, therefore, promotes the design of differentiated intervention policies, for illegal mining with a security component and for exploitation. informal mining in terms of rural development.

â€œWhen you operate a mine you are dealing with a finite resource and every day it is becoming scarce,â€ said Palacios. â€œWe want responsible mining that is also sustainable in all respects, both environmentally and economically. “