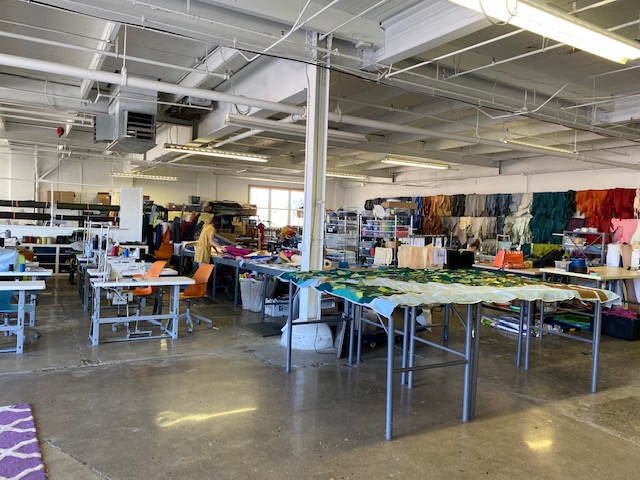 A small bag and accessories store in Grand Rapids, Michigan tries to be everything the modern textile industry isn’t. Instead of endless waste, they reuse recycled materials. They avoid factories abroad and hire local workers whom they aim to pay living and growing wages. And rather than implementing a completely hierarchical leadership approach, workers have a voice in everything from design to material choices. Most of their profits go to the workers and eventually they will become the property of the workers.

The store – Public Thread – was started by Janey Bower, a former city public policy worker who is considering purchasing one of their products. as an investment in new systems that work for people and the environment. Their most iconic bag, the â€œBillboard Bagâ€, is made from used billboard material. Each bag has a distinct look, like the materials they are made of.

â€œJust like in nature, waste doesn’t exist,â€ says Brower. â€œWhen a tree dies, it becomes the fuel for other things to grow. And that’s what we do.

Growing up in the Grand Rapids area and familiar with the public school systems in the suburbs and the city, Brower has witnessed glaring racial and economic inequalities. She worked for the Grand Rapids government in the area of â€‹â€‹public policy and later for a nonprofit focused on homelessness, but ultimately felt that the nonprofit world often did not face the roots. problems they were trying to solve. Their strategies were “side systems,” Brower explained, offering a band-aid for the problems to be solved.

She then rotated to build Public Thread, with the intention of transferring what she learned from her nonprofit and political work into physical form, creating systems changes in a sack. Among its ambitious goals were a manufacturing process that positively impacts the environment and honors manufacturers, as well as a people-centered business approach. Not wanting his employees to feel like a â€œcog in the machine,â€ Brower planned for his team to collectively own the building they work in and eventually become a fully worker-owned company. While not there yet, employees have a say in everything from salaries to project timelines.

â€œThey set limits on how they can do something,â€ Brower says.

Right now, employees hired with little experience can start at $ 15 to $ 17 an hour. Those with more experience can earn up to $ 20. The long-term goal is for all employees to earn $ 70,000 per year, with benefits. Of their eight employees to date, 50% are people of color. But throughout the peak of the COVID-19 pandemic, they temporarily grew to 25 employees and together made 70,000 masks.

“We hope that as we grow we will grow in a sustainable way so that we are not in a temporary work situation, â€said Brower.

Funding for Northern Initiatives, a CDFI that supports local Michigan businesses that build wealth in the community, has reached this critical point in the Public Thread timeline. After making masks during the pandemic, the company needed time to research more partners and projects, and money to pay for this freedom to explore.

â€œShe has a genuine heart for the community and she intentionally hires people of color and women into positions where they can help grow a business,â€ said Elissa Sangalli, CEO of Northern Initiatives.

In a world that wastes millions of tons of textiles, the Public Thread team is not yet satisfied with the amount of material it actually recycles. The Environmental Protection Agency estimates that 16 million tonnes textiles were produced in 2015; 10.5 million tonnes were landfilled, 3 million tonnes were incinerated and only about 2.5 million tonnes, or about 15%, were recycled. In Michigan alone, textiles made up just 2% of the recycling stream in 2014, according to the Department of Environmental Quality. So far, Public Thread has diverted over 100,000 pounds of material from the landfill, and most of it is intercepted from the waste cycles of local organizations.

â€œI don’t know how to do everything and I’m not going to act like it’s my role,â€ Brower said. â€œIt’s an oppressive system. I’m going to help facilitate a system where we can all share what we know, and that’s good enoughâ€¦ We have what we need, just like with our hardware, we have with our staff everything we need. It’s just a matter of being able to cultivate all of these ideas in each of us.

This story is part of our series, CDFI Futures, which explores the community development finance industry through the prism of equity, public policy and inclusive community development. The series is generously supported by Partners for the Common Good. Sign up for PCG’s CapNexus newsletter on capnexus.org.

Emily Rizzo is a media designer and freelance journalist living in South Philadelphia. She reports primarily for the NPR member Philadelphia station, WHYY, on education.