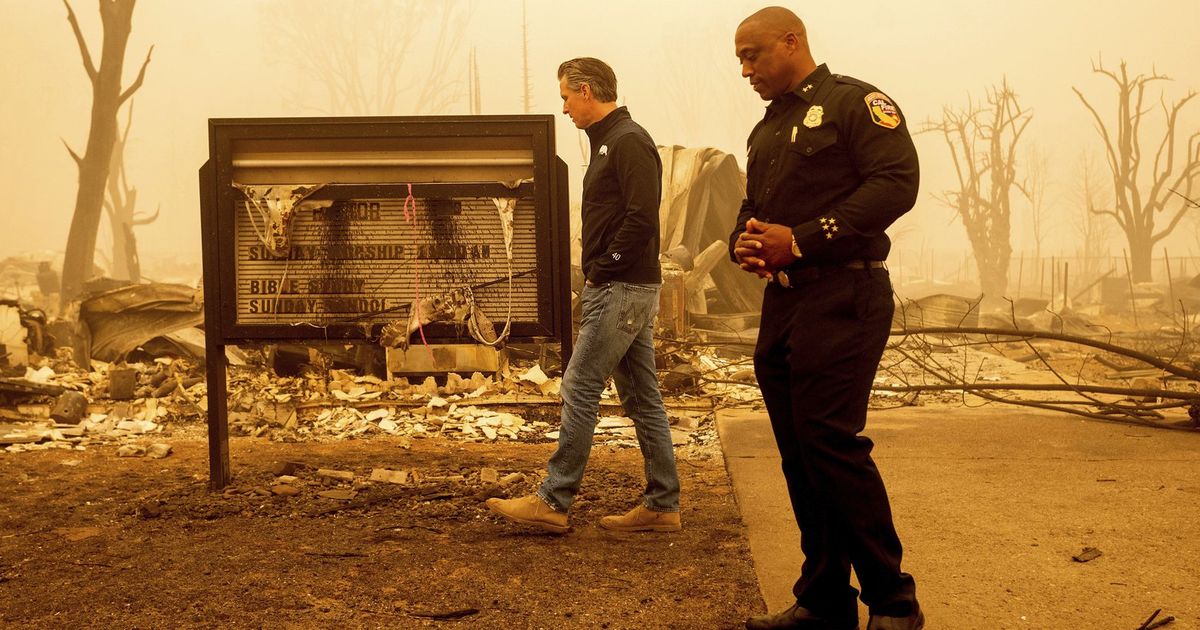 Governors turn to budgets to hedge against climate change

SACRAMENTO, Calif. (AP) — With their state budgets overflowing with money, Democratic and Republican governors want to spend some of the windfall on projects to slow climate change and guard against its consequences, floods and forest fires to polluted air.

Democratic governors such as Gavin Newsom of California and Jay Inslee of Washington have been clear on their plans to increase spending on climate-related projects, including expanding access to electric vehicles and creating more storage for clean energies such as solar energy. Newsom listed climate change as one of five “existential threats” facing the nation’s most populous state when he presented his proposed state budget last week.

In Republican-led states, governors want to protect communities from natural disasters and drought, even though many won’t link that spending to global warming.

Arizona Governor Doug Ducey launched $1 billion for water infrastructure last week as drought rages across the western United States, cutting water supplies to cities and farms. Idaho Governor Brad Little, who has acknowledged the role of climate change in worsening wildfires, has offered $150 million for five years of firefighting costs, plus more for new ones. firefighters. In South Carolina, Gov. Henry McMaster called on lawmakers to spend $300 million in federal funds to, among other things, protect the state’s coastline from flooding, erosion and storm damage.

“I can think of no more meritorious use of taxpayer funds than to protect these pristine properties for future generations of South Carolina,” he said as he presented his state budget proposal, which also includes $17 million for use in the aftermath of hurricanes and other natural disasters.

The governors’ proposals are only the first step in budget negotiations, and they will need to work with state lawmakers on the final details. Many governors will release their plans in the coming weeks, with some already telegraphing their priorities. New York Governor Kathy Hochul, a Democrat, used her state of the state address to call for $500 million in spending on offshore wind projects.

This year’s talks about how to spend taxpayers’ money come not only as many states run massive budget surpluses, but also as the negative effects of changing weather patterns become harder to ignore. . As drought continued across much of the West, an unusual wildfire in December ripped through a Colorado neighborhood near Boulder. Deadly off-season tornadoes ripped through Kentucky and several hurricanes hit the Gulf Coast. Late summer temperatures reached sweltering, record highs in the Pacific Northwest.

“The climate crisis is not an abstraction. This is something that I and every governor in the United States, almost every week, have to deal with,” Washington Governor Jay Inslee, a Democrat, said last week.

Most states are awash with cash as tax revenues beat expectations due to strong consumer spending and rising prices, which together boosted sales tax revenues. On top of that, states are receiving billions of dollars in federal pandemic aid and bracing for a big boost in federal infrastructure funding after Congress passed a $1 trillion public works bill in November. Beyond increased climate spending, states are looking to windfalls to increase reserves, cut taxes, increase funding for education, and increase affordable housing.

California is home to the most ambitious climate spending, with Newsom calling for $22 billion for various projects spread over the next five years. Most of that money would go to transportation projects like electrifying school buses and expanding vehicle charging stations in underprivileged communities. He also proposed an additional $2 billion for clean energy development and storage.

California companies that fight climate change and develop green technologies could be eligible for tax credits. Through programs to build more housing in downtown corridors and make communities more walkable, Newsom has integrated efforts to address climate change throughout its budget proposal.

Colorado Governor Jared Polis and legislative leaders pledged increased wildfire-related investments, such as adding fire response equipment and training firefighters, after the blaze of Boulder County Forest last month. The Democratic governor has asked for about $75 million for such efforts, and the Democratic-led legislature has signaled it wants more.

Polis also wants to spend $425 million on electrifying bus and truck fleets, aerial and ground monitoring of oil and gas emissions, and more.

“From extreme flooding to mega-fires to seemingly endless ozone scares, the long-term health of our state is at stake. … We must do everything in our power to ensure that this n It’s not the new normal,” said Colorado Senate Majority Leader Steve Fenberg.

New Mexico Governor Michelle Lujan Grisham, a Democrat, has asked the state legislature to fund the creation of an “office of climate change,” with a staff of 15 and an initial budget of 2.5. millions of dollars.

This would implement pollution standards for vehicles and push the state’s economy to a point where as much carbon is taken out of the atmosphere as it is emitted. His administration offered limited details about the proposal.

Even as they prioritize climate initiatives, many governors balance those plans with the need to support their state’s current economy as it shifts away from reliance on fossil fuels. In New Mexico, oil and natural gas production reached an all-time high under the administration of Lujan Grisham. At least a quarter of the state’s general fund budget can be allocated to revenue from the petroleum and natural gas industries – guaranteeing public education, health care and other services.

In some states, legislators drive climate spending. Democrats who control the Maryland legislature are pushing a climate change measure that would cut methane emissions, modernize the power grid and invest in green technologies.

The package, subject to negotiations, would accelerate the state’s goal of reducing greenhouse gas emissions. The current plan is to reduce emissions by 40% below 2006 levels by 2030. The Democrats’ new plans are to take that emissions reduction to 60%.

They also want to set a goal of achieving carbon neutrality by 2045, meaning at least as much carbon is removed from the atmosphere as is emitted. Money for climate programs could come from the state’s $4.6 billion budget surplus and federal infrastructure funding.

Maryland Democrats have enough members to override any veto by Republican Gov. Larry Hogan, though he has previously backed efforts to cut greenhouse gas emissions.

State Sen. Paul Pinsky, a Democrat, said advancing climate policy has political merits, especially in the state that is home to the Chesapeake Bay, the nation’s largest estuary. All of Maryland’s state legislators are up for re-election this year, as are about two-thirds of US governors.

“I think lawmakers want to be able to show up on something, and people should be accountable,” Pinsky said. “Are they supporting the environment and that kind of bold action or not?”