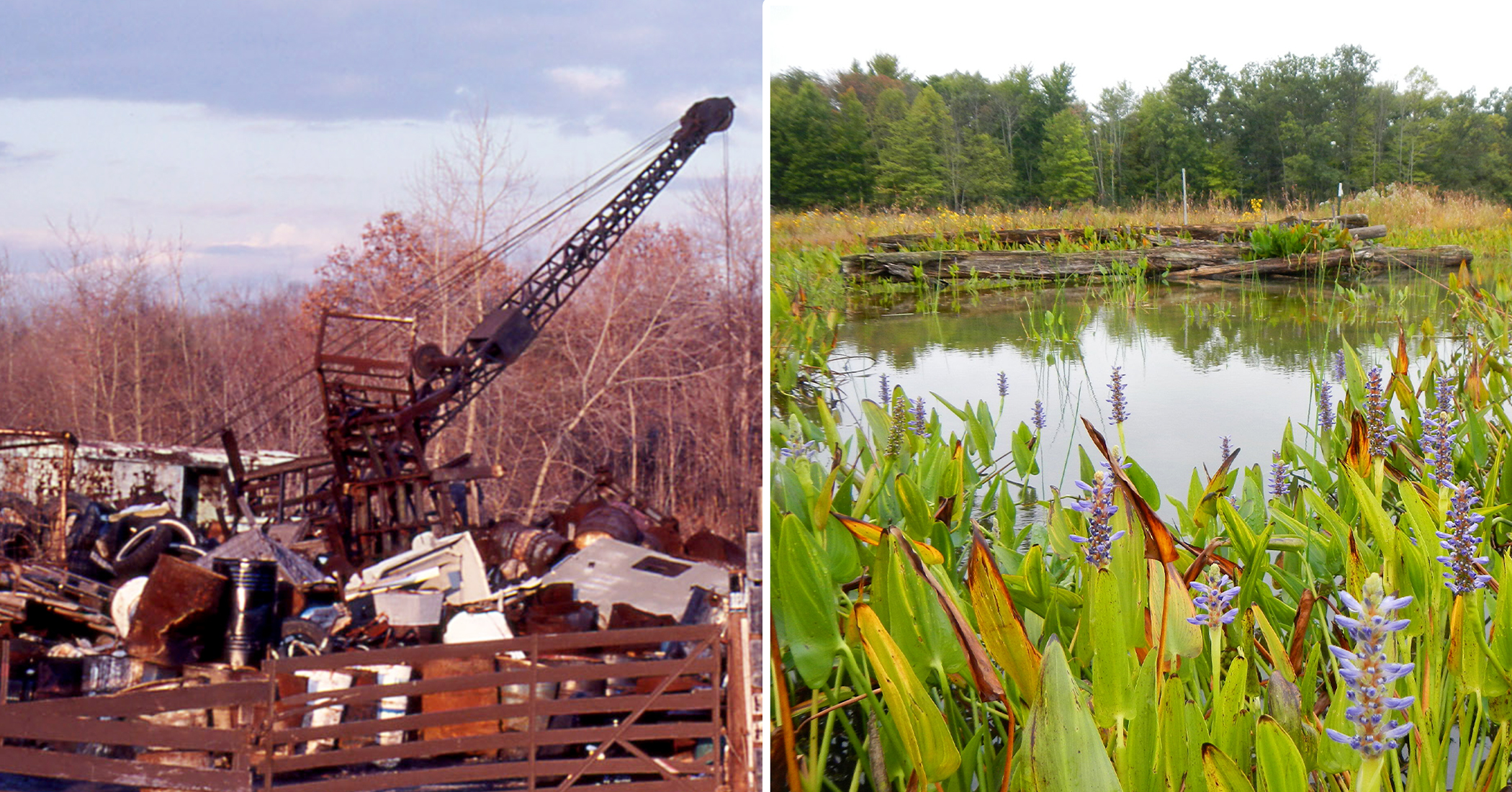 When a toxic landfill in Ohio was repurposed as recreational greenspace in the 1970s, authorities had no idea the scale of the cleanup. From 1948 to 1980, Krejci’s 47-acre landfill was a pile of old tires, trash, noxious chemicals, and rusting cars. It would take more than two decades to trade that for the native flora and fauna, turning the landfill into a thriving swamp, as it is today.

“It was a toxic wasteland just a few decades ago,” Cuyahoga Valley National Park ecologist Chris Davis told National Geographic. “Finding the diversity of species there today is remarkable.”

In the 1940s, the Krejci family of Ohio opened the landfill on a 200-acre site in Boston Township as a convenient dumping ground for rust belt makers. This was before municipal waste management was offered.

These sites were largely unregulated at the time. Without lining the landfill, chemicals from solid and hazardous waste seep into the ground and spread toxicity.

In 1974, President Gerald Ford repurposed the dump as the Cuyahoga National Recreation Area, an offshoot of the United States’ Clean Water Act. Cuyahoga Valley National Park acquired the site in 1985, but visitors began to get sick.

“We found that staff were getting sick and things like doing source [and] resources verify that we had a problem,” Veronica Dickerson, environmental protection and safety manager for Cuyahoga Valley National Park, told ABC News 5 Cleveland. “Sources of radiation haven’t been found, but pretty much everything you can think of has been found.”

It was time for a drastic overhaul.

A former Colorado assistant attorney general, Shawn Mulligan, has been called upon to take companies, such as Chevron, Ford, Federal Metal Co. and Chrysler, to task on behalf of the National Park Service (NPS) using the Superfund Act, which holds parties liable for environmental damage after disposing of their hazardous waste.

Mulligan was awarded nearly $50 million in damages from those actions, which paid for an epic transformation. As the NPS reported in 2016, Ford advanced $29 million and also ran the cleanup itself.

The chemical damage was deep. It took 25 years to remove 375,000 tons of contaminated soil and debris, with excavators having to dig up waste up to 25 feet deep.

As soon as the soil samples returned free of contaminants, the grounds were landscaped to match the natural environment, and soon the 47-acre former dumpsite became a thriving wetland; replacing rusting cars, old tires, industrial chemicals, paint and pesticides were now trees and ponds filled with native fish, insects and amphibians.

In December 2020, the NPS declared the cleanup complete. It was their largest and most expensive reclamation project to date. Photos of the restored site have to be seen to be believed.

“It was amazing to… start working on this project and bring it to completion,” Dickerson said. “[The site] is now as clean as any natural area in the park. This is something remarkable, considering what it was like in 1985.

“I always say if someone wants to eat dirt, this is where you come to eat dirt. This site is clean !

Share your stories with us at [email protected], and keep getting your daily dose of inspiration by signing up for the Inspired newsletter at TheEpochTimes.com/newsletter