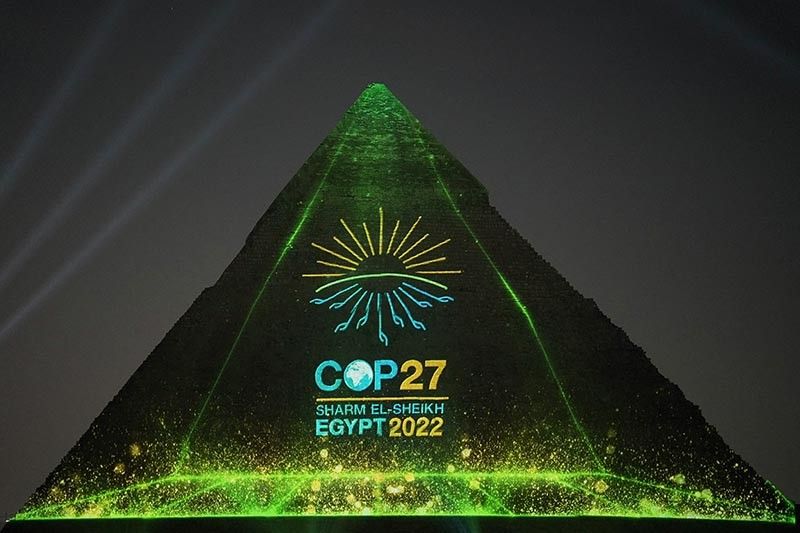 COP27 climate talks kicked off in the resort town of Sharm el-Sheikh on Sunday amid extreme weather events across the globe and an energy crisis stemming from Russia’s invasion of Ukraine .

From November 6-18, governments and members of civil society organizations will once again tackle measures to bring global warming under control and protect communities from the catastrophic impacts of the climate crisis.

“This COP27 is going to be very important for us Filipinos because we are seeing an increase in extreme weather events that are causing economic and non-economic loss and damage,” said Ivan Enrile, Climate Justice Program Manager at IBON International. Philstar.com.

“We are in a period where we have very few resources, commodity prices are rising and many people are out of jobs. The impacts of climate change amplify these development concerns,” he said. he adds.

The UN-organized climate conference comes a week after severe tropical storm Paeng (international name: Nalgae) triggered landslides and flash floods in the archipelago, killing at least 154 people. Scientists have warned that the storms are getting more powerful as the world continues to warm due to climate change.

“After the devastating effects of Typhoon Paeng, it is clearer that demanding reparations should be at the center of the Philippine agenda,” said Jon Bonifacio, national coordinator of the Kalikasan People’s Network for the Environment.

“Major polluters must pay for the damage caused by their emissions,” he also said.

Climate finance is expected to be at the center of discussions at this year’s climate summit. The flow of money from countries that have become rich through the burning of fossil fuels would allow climate-vulnerable countries like the Philippines to better prepare for the impacts of climate change.

According to a new report from Oxfam, the Philippines ranks fifth among Asian countries that have received the highest amount of climate finance. However, most of the $7.8 billion in climate finance it received from 2013 to 2020 was in the form of debt.

The Philippine delegation to COP27, led by environment chief Maria Antonia Yulo-Loyzaga, said it “will continue to call on developed countries to meet these obligations and meet their climate finance commitments without delay. , technology transfer and capacity building”.

The country delegation plans to contribute most to the work streams dealing with Article 6 of the Paris Agreement, adaptation, climate finance and loss and damage.

The success or failure of COP27 likely hinges on the willingness of wealthy countries to provide reparations or compensation for loss and damage. Loss and damage refers to the costs that some nations are already facing due to a warming planet.

“Will it be on the agenda? Will there be a decision to negotiate a stand-alone L&D funding facility? asked Tony La Viña, associate director for climate policy and international relations at the Manila Observatory.

At the climate talks in Glasgow last year, developed countries blocked the establishment of a loss and damage financing mechanism. They chose to engage in a “dialogue” on the subject in future discussions.

RELATED: Gas expansion a detour in the Philippines’ transition to cleaner, cheaper energy

Leave fossil fuels in the past

In a report published in April, the Intergovernmental Panel on Climate Change pointed out that capping warming at just 1.5 degrees Celsius implies “rapid, deep and in most cases immediate reductions in emissions of greenhouse gases in all sectors”.

For Gerry Arances, executive director of the Center for Energy, Ecology and Development, climate-fueled disasters ravaging countries and increasingly volatile electricity prices amplify the need to leave coal, gas and other fossil fuels in the past.

“Fueled by all of this, Philippine delegates must come to the COP brandishing ambitious calls for a swift end to fossil fuels, starting with historically polluting nations,” Arances said.

“We must also demand the realization of how the necessary resources and capabilities for developing countries like ours to advance a rapid energy transition will be provided,” he added.

President Ferdinand “Bongbong” Marcos Jr. has frequently mentioned the need to address climate change in his speeches. But climate and environment groups said none of the chief executive’s rhetoric had so far translated into meaningful action.

LILY: In the first 100 days, Marcos talks about climate change but action is still on the back burner