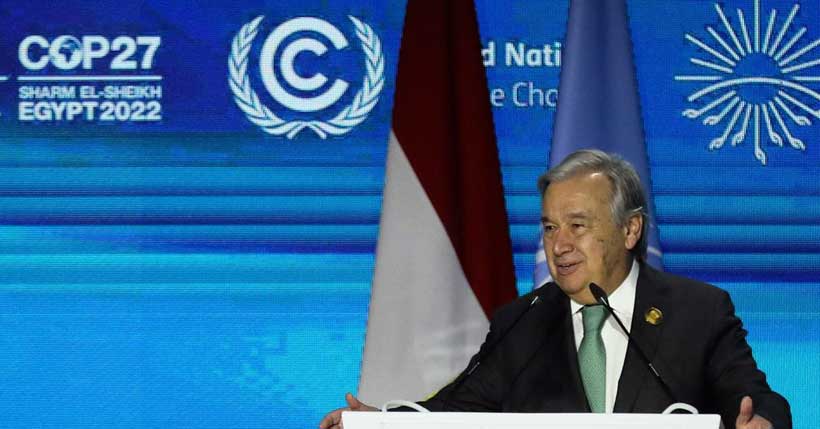 As previously explained, COP 27, held this time in Egypt, began with a proposal for climate compensation.

This major annual conference brings together 200 country representatives. Keep in mind that humans don’t actually have much time to waste with the climate in today’s world. The past seven years have been the hottest on record and humanity is rapidly approaching a dangerous health and safety tipping point. A number of reports published prior to the conference offered new insights and data. Apart from that, there are important issues on the table: finances, losses and damages.

Overcoming the crisis has not only cost billions of dollars, it also means changing the way the global financial system works in all areas. At the United Nations Climate Conference in Copenhagen, developed countries pledged to mobilize $100 billion a year for climate action in developing countries. This commitment was reaffirmed in the Paris agreement, but the target has not yet been achieved. Other losses and damages occur when the impacts of climate change are irreversible. Losses and damages incurred can include extreme weather events as well as slow onset events, such as sea level rise, ocean acidification, loss of biodiversity, etc. During last year’s COP, maritime issues were the main demands of the countries of the archipelago.

The next thing to know is that all eyes will be on the big emitters. The largest group of 20% of the G20 emits about 80% of global emissions. Although many developing countries are setting ambitious goals, the world is currently waiting for developed countries to follow suit. Around the world, people want world leaders to take part in COP27 with more targeted actions and policies on the risks they face.

This COP27 meeting came after the world experienced various natural disasters, from floods that killed more than 1,700 people in Pakistan to droughts in China, Africa and the United States. Developing countries demand special “loss and damage” funds, but rich countries deny the request, an issue that has not been resolved for Denmark’s loss and damage pledge.

A June 2022 report by 55 disaster-prone countries estimated total climate-related losses over the past two decades at around $525 billion. This figure is equivalent to 20% of the total GDP of these disaster-prone countries. Some studies show that by 2030, the total loss will reach 580 billion USD. However, there is no agreement on what is calculated in terms of loss and damage in climate catastrophe.

In addition, the question of who is going to pay and who is going to receive are two very difficult things to manage because it is about money. The United States and the European Union rejected proposals in Heading 26 last year on the creation of a climate compensation fund, but agreed to dialogue without a clear end goal. Only a handful of countries provided small token funds.

Some funding from the United Nations and the Development Bank helps a little in terms of costs and damages, but not specifically for climate damages.

Developing countries proposed that loss and damage be included on the COP27 agenda. Island countries such as the Maldives and Jamaica as well as China, which are the largest CO2 emitting countries in the world, have banded together to demand the establishment of a compensation fund at COP 27. The current problem is that while the proposal from the Small Island Alliances suggests that COP 27 approve the formation of the United Nations Response Fund, which collects money from various sources to donate to countries affected by the disaster, if the climate crisis will be brought under control in the near future. Of course not, because it takes a long time to get clear about funding issues and how these funds work.

Several countries are exploring alternative payment methods after rich countries failed to provide $100 billion a year for 2020 climate finance. Another idea proposed by United Nations General Antonio Guterres is to tax the profits of companies that use fossil fuels for financing purposes.

Generally speaking, major countries have not agreed to spend money on climate change, given the current state of the economy. Meanwhile, poor countries that are affected by environmental damage cannot really expect much from the management of climate finance.

Whose voice will be heard?

The Egyptian presidency is controversial due to Egypt’s poor human rights record. Since coming to power in 2013, President Abdul Fatah El Sisi’s government has overseen a widespread crackdown on dissent. Clan with Bill and British MP Caroline Lucas said, fearing that a successful conference would not be possible due to the Egyptian government’s repressive measures. It is believed that at this stage the conference will be used to cover up human rights abuses in the Egyptian state.

The Indonesian government has prepared several items that can be negotiated, including:

The Minister of Environment and Forests issued Regulation No. 21/2022 on the implementation of the economic value of carbon and technical carbon trading for national and international markets. Emissions trading governed by regulation includes trading emissions through carbon caps and trades, carbon offsets, production-based payments, or other appropriate technological mechanisms.

Indonesia tried to organize a biomass conference in 50 power plant sites. The trick is to mix charcoal and wood or waste pellets as a generator. In addition to conferring, the pillar of the energy transition is the use of biofuel B40. This means that the composition of palm oil in biodiesel will be increased to 40% compared to diesel. In the improved document, the government targets the use or use of B40 to reach 100% by 2030. Confirmation and B40 both come from land-based products. Energy plantations require forest land, although industrial plantations can be used. Meanwhile, B40 demands more palm oil production

How do we understand

It seems that humanity today has greater and more difficult challenges to negotiate at the international level. Not only that, the solutions offered by several countries at the cop meeting are at least still very business-oriented. As at the previous COP26, efforts to “halt” the use of coal have been replaced by a gradual “reduction”. The rate of damage and the perceived negative impacts are not proportional to the mitigation efforts undertaken.