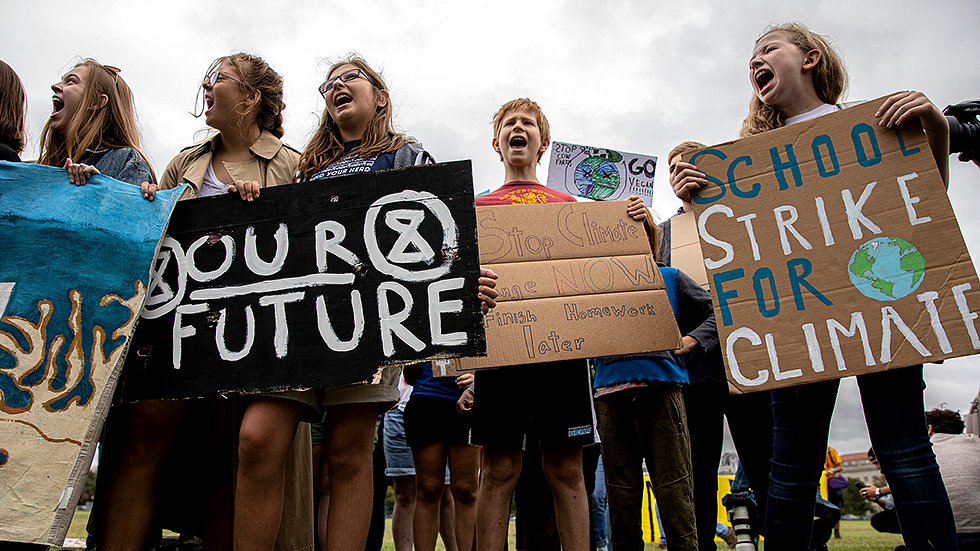 Climate change: Biden, give the kids their day in court

Many US statutes contain opening passages with “statements of congressional intent” – brief explanations of what Congress hoped a particular law would accomplish.

They express the best intentions of Congress. Some codify moments of moral clarity that legislators want to preserve in laws.

However, a notable absence today is moral clarity on global climate change. Even though the climate is deteriorating almost everywhere, Congress has never passed meaningful legislation to curb the root cause, fossil fuel pollution. The Clean Air Act allows the government to regulate several “criteria pollutants”, but the most harmful greenhouse gases are not among them.

The United States concluded an international climate treaty in 1992, but despite some promising moments and notable exceptions, Congress has acquiesced to an aggressive campaign by oil companies to persuade Americans that climate change isn’t real. or at least not as important as the world. say the scientists.

Congress has been clear on environmental protection more broadly, particularly in its landmark legislation, the National Environmental Policy Act (NEPA) of 1970. Its opening statement reads in part: ” it is the continuing policy of the federal government…to encourage and promote the general welfare, to create and maintain conditions in which man and nature can exist in productive harmony and meet social, economic needs and others of present and future generations of Americans.

Three things stand out: “Productive harmony” with nature is essential to our well-being, it is an ongoing responsibility of government and we must maintain it for future generations.

This raises two important questions: What exactly is the present generation’s obligation to the future? Is the federal government meeting this climate change obligation?

As I wrote a year ago in a different venue, “There are 6,653 words in America’s most important founding documents: the Constitution, the Bill of Rights, and the Declaration of Independence. The words children, future and generations are not included. The idea of ​​protecting unborn generations is implied only once, where the preamble to the Constitution indicates that the purpose of the document is to secure tranquility and promote the general welfare of “we- themselves and our posterity.

Jovan Kurbalija, Ph.D., an expert in international law, points out that the rights of future generations have moved from a philosophical and moral question to a political and legal one because no previous generation has been so threatened by existential crises. He suggests that intergenerational rights consist of three parts: physical survival, human dignity, and the ability to use our creative potentials – the inalienable right that the Declaration of Independence calls “the pursuit of happiness.”

President Theodore Roosevelt wrote that the right to natural resources (he was talking about wild game) extends to future generations “in the bosom of time”.

“Our duty to the whole, including the unborn generations, commands us to prevent a present unprincipled minority from wasting the inheritance of these unborn generations,” he wrote in 1916. Today, the sin of Waste extends to natural resources such as those needed for a habitable planet – healthy soils, oceans, air, water, etc.

Several states – Pennsylvania, Montana and Massachusetts, for example – have established the inalienable legal right of unborn generations to a healthy environment. Montana’s constitution states, “The state and every person shall maintain and improve a clean and healthy environment…for present and future generations.” He directs his legislature to protect “the environmental life support system from degradation.”

On the federal front, a group of 21 children and young adults have been navigating their way through the federal court system for nearly seven years to establish that young Americans have a constitutional right to a future without catastrophic climate change. their trial, Juliana vs USA, spanned the Obama, Trump and Biden presidencies. More than 80 million Americans aged 19 and under, as well as countless future Americas, would benefit from such a right.

With the help of a brilliant, soft-spoken lawyer, Julia Olson, the Julianas doggedly engage in an asymmetrical war against a legal goliath, the United States Department of Justice. But like its predecessors, Biden’s Justice Department appears to be doing everything in its power to keep the lawsuit from going to court. On the one hand, the oil industry and others engaged in the long campaign of disinformation on global warming could be brought to the forefront where disinformation would be perjury.

However, the Julianas deserve more than a documentary. They deserve their day in court, where they could bring the government and the oil industry to court. They also deserve a direct response from President Biden. He should let their lawsuit go to trial or explain why he won’t. With his climate plan stalled in Congress, you’d think he’d welcome even the slightest chance that the courts would come to the rescue.

William S. Becker is a former Central Regional Director for the U.S. Department of Energy who administered energy efficiency and renewable energy technology programs, and he also served as Special Assistant to the Department’s Assistant Secretary for Energy Efficiency and Renewable Energy renewable. Becker is also executive director of the Presidential Climate Action Project, a nonpartisan initiative founded in 2007 that works with national thought leaders to develop recommendations for the White House as well as House and Senate committees on climate policy. and energetic. The project is not affiliated with the White House.