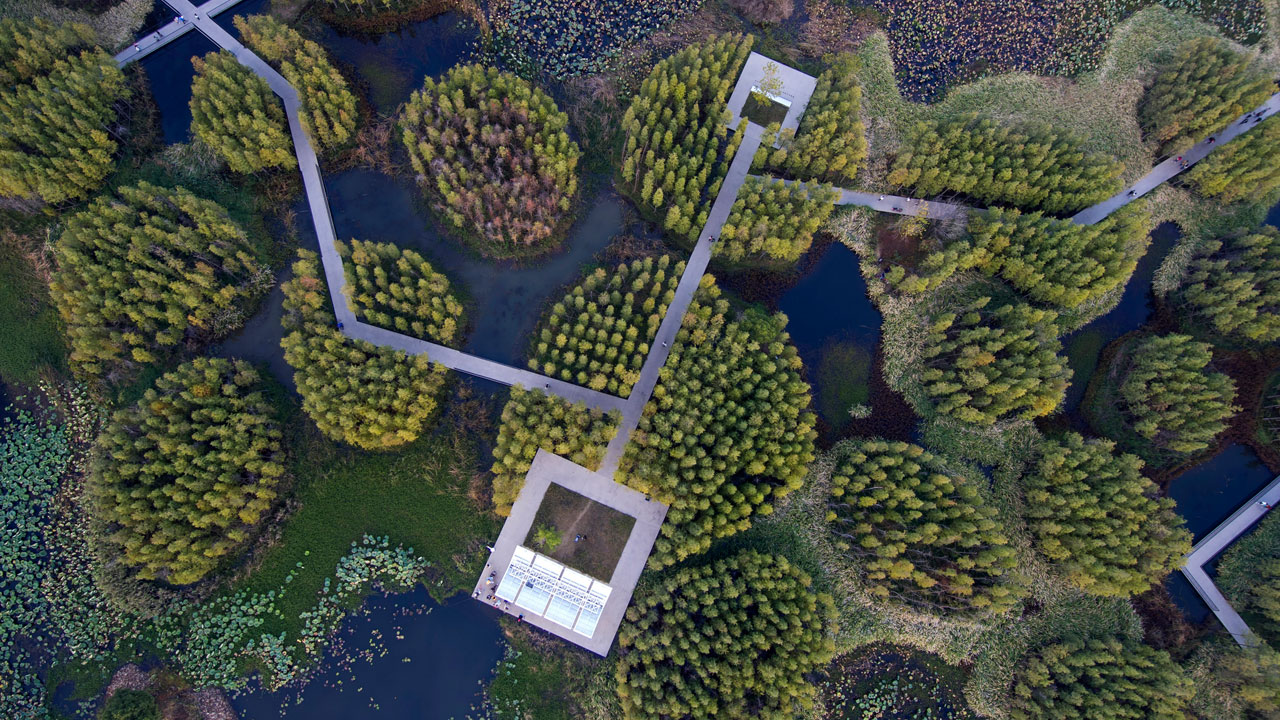 As the climate heats up, a Chinese urban planner advocates ‘sponge cities’

To cushion the impact of extreme weather from climate change, a Chinese landscape architect has advocated for China and other countries to create “sponge cities”.

Yu Kongjian, who spoke to The Associated Press in Beijing, uses broad language to express his vision of cities that can withstand variable temperatures, drought and heavy rains. The challenges to implementing this vision at a time of ambitious economic development in China are manifold.

Yu criticizes much of Asia’s modern infrastructure for being built on ideas imported from Europe, which he says are ill-suited to the monsoon climate over much of the Asian continent. He points to the recent floods that have wreaked havoc in many Asian cities, which he says are caused by this architectural mismatch.

“There’s no resilience at all,” Yu says of the concrete and steel infrastructure of big cities and the use of pipes and canals to drain water. “These are useless, they will fail and continue to fail.”

Instead, Yu proposes using natural resources, or “green infrastructure” to create water-resilient cities. This is part of a global shift among landscaping and civil engineering professionals towards closer collaboration with the natural environment. By creating large spaces to hold water in city centers — like parks and ponds — stormwater can be held in place, helping to prevent flooding, he says. Sponge infrastructure also, in theory, provides means for water to infiltrate and recharge groundwater in times of drought.

“The idea of ​​a sponge town is to recover, to give water more space,” Yu said.

A turning point in China’s awareness of climate change and urban adaptation came a decade ago, Yu said. A devastating flood hit the capital Beijing in July 2012.

Yu then sent a letter to Beijing Party Secretary Guo Jinlong, calling for a change in the way the government approaches the city’s infrastructure. He continued to send letters to senior officials and leaders, including Chinese leader Xi Jinping.

At a government working conference the following year, China incorporated the idea of ​​sponge cities as a national strategy, “giving full play to the absorption, storage and slow release of rainwater by ecological systems.

The following year, it launched 16 sponge town pilot projects, adding 14 more in 2016. Officials also said they would grant 600 million yuan (83 million USD) each year for three years to municipal towns, 500 million to provincial capitals and 400 million yuan. to other cities.

The mandate and subsidies have spurred a boom in water-absorbing infrastructure, including in major cities like Beijing, Shanghai and Shenzhen.

AN EXPERIMENT IN PROGRESS

In China, a demonstration park is located in the northeast corner of Nanchang city in southern China. In mid-October, engineers were putting the finishing touches on a lush, scenic 126-acre park designed to cushion the impact of floods and droughts.

A former coal ash dump, the “Fish Tail” sponge park is built in a lower part of the city and is intended to regulate water to surrounding neighborhoods and business districts. Fly ash, a byproduct of burning coal, was mixed with soil to create mini-islands in the lake that allow water to seep through. Fang said the mixture, held in place by the roots of the plants, prevents the ashes from flowing into the water. Whether this prevents the release of toxic elements into the ashes is an open question.

During dry periods, water could be abstracted, purified and used for plant irrigation.

Fang Yuan, an engineer at Yu’s design institute Turenscape, said the park serves as an “ecological aquarium”, capable of holding 1 million cubic meters of water during floods and means the water can be used, rather than simply discharging it into wastewater. system.

The park also serves as a habitat for plants and wildlife disturbed by extreme weather conditions such as drought.

Sometimes the concept of sponge city has been difficult to implement in China. Misallocation of funds, lack of expertise in sponge town planning and other issues have doomed some projects.

In April, the Ministry of Housing and Urban-Rural Development announced that some cities had “insufficient awareness, inaccurate understanding and unsystematic implementation of sponge city construction”.

The notice also warned against using funds earmarked for building a sponge city for other general infrastructure projects, such as buildings and roads.

The guidelines were issued after massive rains and catastrophic flooding in the city of Zhengzhou killed 398 people last summer. Floodwaters inundated a section of the city’s subway, trapping hundreds of commuters. Rescuers flocked to the scene, but 14 people died in the subway disaster.

Notably, Zhengzhou was one of the pilot sponge cities, with a planned investment of 53.58 billion yuan ($7.4 billion). Some have wondered if the sponge town projects work.

But a State Council investigation published in January found funds had been misspent. Only 32% of the 19.6 billion yuan invested went to what the government defined as sponge town concepts.

“Even at the critical time when the whole country mobilized forces to support rescue and disaster relief in Zhengzhou, they were still ‘building flower beds,'” according to the State Council report.

Yu recognizes that there is a surveillance problem. “Many cities just use it as propaganda – just to get a lot of money from the central government,” but then invest the funds in other projects.

While the issues of implementing absorptive cities are resolved, China’s vulnerability to extreme weather is clear. A prolonged drought since July has drastically reduced China’s largest freshwater lake, Poyang.

In Tangtou village, at the northeast corner of the normally water-rich lake, residents scooped buckets of water from a village pond to tend to their vegetables.

Since July, villagers say they have seen virtually no rainfall, let alone water in their part of the lake.

“The whole lake was completely dry, and even the Yangtze River was dry,” Duan Yunzhen, 73, said as he sprinkled pond water on his crops.

“We planted rice, cotton, sesame and sweet potato – they are all suffering from drought,” said 62-year-old Hong Zuhua.