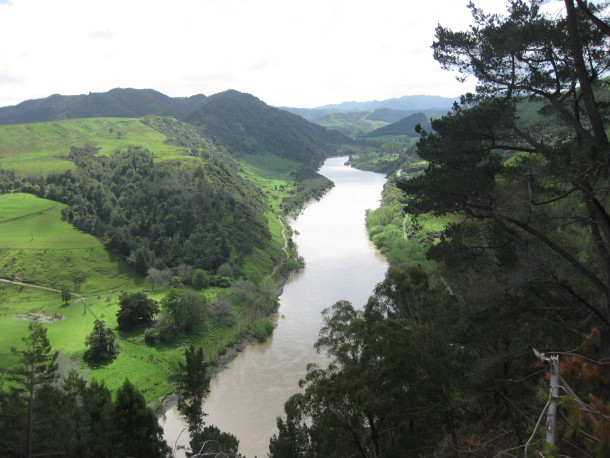 A fight for the rights of nature in Florida

stream/download this segment as an MP3 file

The Whanganui River is a major river in the North Island of New Zealand which has been granted personality rights. (Photo: Felix Engelhardt, Wikipedia Commons, CC BY 2.0)

Nature’s Rights Laws elevate nature to have legal rights similar to those of humans, and in Orange County, Florida, local communities are citing these laws in an attempt to protect backyards. development water. Host Bobby Bascomb speaks with reporter Katie Surma about the ongoing battle between Orange County and the state legislature over granting nature rights.

BASCOMB: While many federal governments continue to drag their feet on seriously addressing the climate crisis, local communities around the world have already begun to take action, in part by enacting rights of nature laws. A doctrine rooted in Indigenous thought, Nature Rights Laws elevate nature to have the same legal rights as humans. Such laws have been enacted in some 17 countries around the world and more than 30 American communities. In Orange County, Florida, a challenge to an existing nature rights law is making its way through the court system. The case includes five waterways suing a developer. Katie Surma is a reporter for Inside Climate News who has followed the case and joins me now. Welcome to Life on Earth, Katie.

SURMA: Thank you very much, Bobby. It’s great to be here.

BASCOMB: So what are the rights of nature? And how is this different from current environmental policy?

SURMA: The rights of nature is a somewhat unorthodox legal movement that aims to give the elements of nature, so most often its rivers or other waterways, legal rights in the same way that humans have rights humans. And that’s different from traditional environmental law, which is usually human-centric, or some people say anthropocentric?

BASCOMB: And how might the rights of nature conflict with our notion of personal freedom and property rights, that sort of thing.

SURMA: In the United States, our bill of rights protects humans from government interference. And that prioritizing things like property rights, and the rights of nature, you know, kind of elevates natural beings to the same level as humans. And so those things will conflict with, you know, personal property, when you own land, you have the right to destroy it, generally.

BASCOMB: And there’s a case right now in Orange County, Florida that really highlights the potential of rights of nature measures. Can you tell us about this case? What is happening here?

SURMA: Yeah, and it’s a really interesting case, because it sort of touches on one of the central issues that a lot of these nature rights provisions face in the United States, which is that, you know, local communities pass laws that recognize the rights of nature. And at the same time, the state legislatures are running ahead of them and saying you can’t do this. In 2019, people started campaigning to recognize waterway rights. As this campaign continues, the state legislature slipped a few sentences into a bill that was about to pass, saying Orange County can’t do this. Well, voters got to the polls a few months later, and it’s 2020, in one of the most divisive elections I think we’ve seen in a long time. And 89% of county voters said yes, we want to recognize the rights of nature. And you had this kind of confrontation between the state legislature and the county. Well, these waterways that now have rights have filed a lawsuit against a developer claiming that the planned development project will encroach on the rights of these waterways, polluting them by stopping the flow of water. And so the matter is now in litigation. And what the defendants are trying to do, the defendants are the developer and the state environmental protection agency. They want to dismiss the case saying it’s forewarned. And we haven’t even issued the permit yet. So it’s not good for disputes. The waterways plaintiffs and a man named Chuck O’Neal, who is the leading advocate for these laws in Orange County, Florida, have thrown a whole bunch of arguments in court trying to enforce this law and to enforce waterway rights. . And, and one of the things that they’re arguing is that the state can’t anticipate this law that we have an inherent right as a charter county to self-government, and that the state is going to enact environmental legislation, that it is a floor, not a ceiling. Since a floor is therefore the basic minimum, local authorities can then enact stricter environmental protection. And that’s something that’s happened in Florida in a number of other areas. So local communities are trying to enforce stricter laws on mask mandates, on banning straws, for example, sunscreen which contains chemicals that kill coral reefs, and the state is trying to get ahead of these laws. So it’s an interesting question. And it’s going to be really interesting to see what happens.

BASCOMB: Florida is an interesting example. I mean, it’s not exactly a left-wing blue state that you might expect to be behind something like that. The state voted for President Trump, although Orange County, I believe, went for President Biden. Why do you think voters there are so convinced by this argument about the rights of nature?

SURMA: Sources there have told me that the people of Florida, in particular, are very connected to the environment, it’s not just huge for the economy, tourism is a big chunk. But Florida is beautiful. People love their natural environment and they see what is happening there. For example, a major problem is toxic algae blooms which, well, they can occur naturally. They are fed by agricultural runoff. And so when these algal blooms happen, they suck oxygen out of the water, they kill thousands of tons of wildlife in one case. People see it, they feel it, it hurts human beings too, and they want to stop it. And so, whether you’re left and right of center elsewhere, people are supporting this idea because they see it happening. They live it themselves and they know something is wrong.

BASCOMB: Well, it’s easy to see how industry and agribusiness might not be very happy with nature having rights in this way. What kind of pushback do you hear?

SURMA: Again, what the sources tell me is that the agricultural sector in particular has declined. They also played a significant role in Ohio, where Toledo residents attempted to enshrine the Lake Erie Bill of Rights protecting Lake Erie. It’s business threatening, you know. If nature has legal rights, then people, businesses and government will have new obligations.

BASCOMB: Well, what if nature had rights, especially the waterways that we talked about? What would that prohibit? I imagine, you know, the pollution. But does that also mean fishing? You know, recreating on the river? Where is the line of what is allowed?

SURMA: Yeah, the advocates say, you know, it’s not about criminalizing or prohibiting cutting down a tree or shooting a deer. It is about maintaining the integrity of ecosystems as a whole. So making sure they can regenerate because right now the rate of change, you know, from human pollution and just humans acting on their environment, is outstripping the ability of ecosystems to adapt and Carry on. So the idea is not, you know, that an ant is going to have rights and it’s going to stop a major development project. It’s about, you know, raising the interests of nature to a level where it has more of a say in governance, government decisions, which projects get the green light and which don’t. . Nobody really knows how it’s going to work because it’s a new legal idea. And we kind of have to wait and see how, you know, the courts, the courts implement it.

BASCOMB: Katie Surma is a reporter for InsideClimate News. Katie, thank you so much for talking to me today.

SURMA: It was my pleasure. Thank you for hosting me.


Inside climate news | “Does nature have rights? A growing legal movement says that rivers, forests and wildlife have their place too”