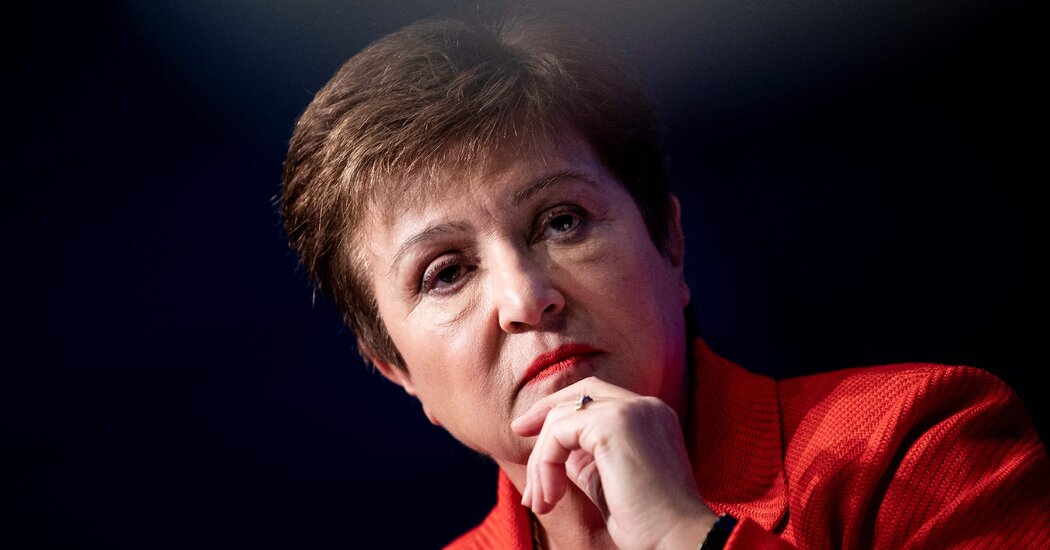 A debate hangs over the IMF: should it do more than put out fires?

Unbalanced access to vaccinations, extreme economic inequalities, rising food prices and massive debt are on the agenda when the International Monetary Fund and the World Bank meet for their annual meetings in Washington next week. .

An urgent issue that is not on the official program is the controversy that has swirled for weeks around the head of the IMF, Kristalina Georgieva, threatening her leadership.

An investigation last month accused Georgieva of rigging data to portray China as more business-friendly in a 2018 report while she was managing director of the World Bank. Ms. Georgieva has denied any wrongdoing.

The scandal focused on the bank’s credibility – billion-dollar decisions can be made based on its information – as well as Ms Georgieva’s guilt.

But behind the debate over its future lie fundamental questions about the changing role of the IMF, which has helped guide the world’s economic and financial system since the end of World War II.

Once viewed closely as a financial watchdog and a first responder in countries in financial crisis, the IMF has more recently helped manage two of the greatest risks to the global economy: extreme inequality and climate change.

Some stakeholders, however, were irritated by the scope of the fund’s ambitions and the extent to which it should venture into the World Bank’s field of long-term development and social projects. And they oppose what is seen as a gradual tilt.

“There is a modernization trend here going through the big financial institutions, which is creating a kind of tension,” said Adam Tooze, historian at Columbia University and author of “Shutdown: How Covid Shook the World’s Economy” .

Other pressures are also weighing on the agency. Washington is still home to the headquarters of the IMF, and the United States is the only one of 190 member countries with a veto, because it contributes more than any other. But its dominance has been increasingly challenged by China – a strained relationship still strained by trade and other tensions – and emerging countries.

The willingness of the Federal Reserve and other central banks to inject trillions of dollars into the global economy to limit downturns also means that other lenders except the IMF have sufficient liquidity. surplus to lend money to short-lived countries. China has also significantly expanded its loans to foreign governments for infrastructure projects as part of its ambitious Belt and Road initiative.

At the same time, long-held beliefs like focusing only on growing an economy, ignoring issues like inequality and environmental damage, are widely seen as outdated. And the favorite cocktail for helping debt-ridden nations that was popular in the 1990s and early 2000s – austerity, the privatization of government services, and deregulation – has fallen out of favor in many circles as punitive and often counter productive.

Debate over the role of the IMF was seething before the appointment of Georgieva, who entered the third year of her five-year term this month. But she has embraced an expanded role for the agency. Bulgarian economist and the first in an emerging economy to lead the fund, she stepped up the attention of her predecessors to deepening inequalities and made climate change a priority, calling for an end to all fossil fuel subsidies, a carbon tax and significant investment in green technologies.

She argued that, as efficient and rational as the market is, governments must intervene to correct inherent flaws that could lead to environmental devastation and blatantly unfair opportunities. Sustainable debt has replaced austerity as the watchword.

Here was “A once in a lifetime opportunity,” she said, â€œto support a transformation of the economyâ€, one that is greener and fairer.

This year, Georgieva succeeded in creating a special $ 650 billion reserve fund to help struggling countries finance healthcare, buy vaccines and pay off debt during the pandemic.

This approach has not always appealed to conservatives in Washington and on Wall Street.

Former President Donald J. Trump immediately opposed the new reserve funds – known as Special Drawing Rights – when they were offered in 2020, and Republicans in Congress continued the criticism. They argue that the funds primarily help American adversaries like China, Russia, Syria and Iran while doing little for poor countries.

that of Mrs. Georgieva climate activist agenda also clashed with Republicans in Congress, who opposed carbon pricing and pushed to withdraw from multinational efforts such as the United Nations Framework Convention on Climate Change and the Paris Climate Agreement .

The same goes for his advocacy for a global minimum corporate tax like the one more than 130 countries signed on Friday.

In July, Laurence D. Fink, who runs BlackRock, the world’s largest investment management firm, and who disagreed with the IMF’s stance on Argentina, called the fund and the World Bank obsolete. and said they needed to â€œrethink their rolesâ€.

The World Bank’s data-rigging investigation focused on what’s known as the Doing Business Report, which contains an influential index of business-friendly countries. WilmerHale, the law firm that conducted the investigation, said various senior officials lobbied to raise the rankings of China, Saudi Arabia, the United Arab Emirates or Azerbaijan in the 2018 editions. and 2020.

The law firm said Ms Georgieva was “directly involved” in efforts to improve China’s rating for the 2018 edition. She said WilmerHale’s report was inaccurate and dismissed her accusations. The IMF’s executive board reviews the findings.

The United States, which is the fund’s largest shareholder, declined to express support for it after the allegations. Ahead of an IMF board meeting on Friday, Georgieva maintained the strong support of many of the fund’s shareholders, including France, which had pushed for her to land the job in 2019. On Friday evening, the IMF published a statement saying that the board “would ask for more details with a view to concluding its examination of the matter very soon”.

In Congress, Republicans and Democrats have called on the Treasury Department to undertake its own investigations. A letter from three Republicans said the WilmerHale inquiry “raises serious questions about Director Georgieva’s ability to lead the International Monetary Fund.”

Several people came to his defense, including Shanta Devarajan, an economist who helped oversee the Doing Business 2018 report and a key witness to the investigation. He wrote on Twitter that the law firm’s conclusions did not reflect the entirety of her statements; and that the idea that Georgieva had “put her thumb on the scales for the benefit of a nation is beyond credulity”.

â€œIt was her job to make sure the final report was accurate and credible – and that’s what she did,â€ added Mr. Devarajan.

In an interview, he said critics used the investigation to discredit Ms Georgieva. The problem, he said, is “how did people choose to read the report’s findings and use them to criticize Kristalina’s credibility and leadership.”

Mr. Devarajan was not the only one to argue that the controversy somehow functioned as a proxy for challenging the IMF leadership. Jeffrey Sachs, director of the Center for Sustainable Development at Columbia, wrote in the Financial Times that Ms. Georgieva was receiving “McCarthyite treatment” by “anti-Chinese forces” in Congress.

Whatever role one prefers for the IMF – traditional, extended, or whatever – scandal is both a distraction and a threat.

Nicholas Stern, a British economist who was previously chief economist and senior vice president of the World Bank, said the controversy could not come at a worse time.

â€œThe coming years are of vital importance for the future stability of the global economy and environment,â€ he wrote in a letter to the IMF’s board of directors on behalf of Georgieva. “It is a period as decisive as the one we have known since World War II.”